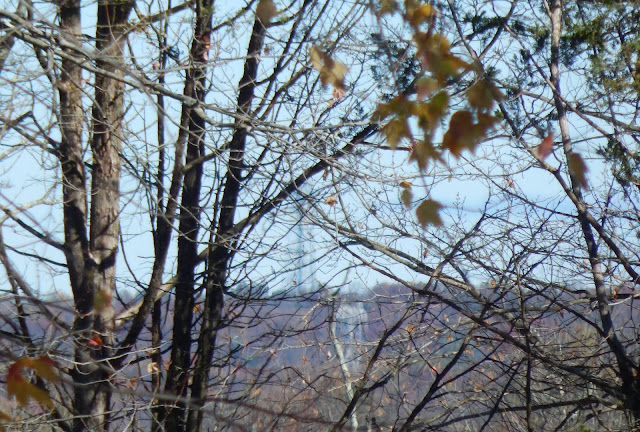 One evening from our porch my husband spied a blinking light in the distance and as twilight deepened it twinkled as a tantalizing, bright pin-prick above the mountains surrounding our valley. Perched high on some tower it flashed regularly and we watched it throughout the summer months.

Every time we took a ride we looked across the fields and farmhouses to see if we could spot the mystifying tower. We pointed it out to friends. Some of them just shook their heads. Others took pictures of local water towers thinking maybe one of them was "our" tower. It became a little game in our lives and we scratched our heads from time to time wondering what kind of structure it might be. Occasionally we discussed how one day we ought to find "the tower". Admittedly, a part of me was caught between unraveling the mystery and leaving it as an unsolved puzzle, always imagining what it could be out there, that mysterious flashing light far off in the distance. 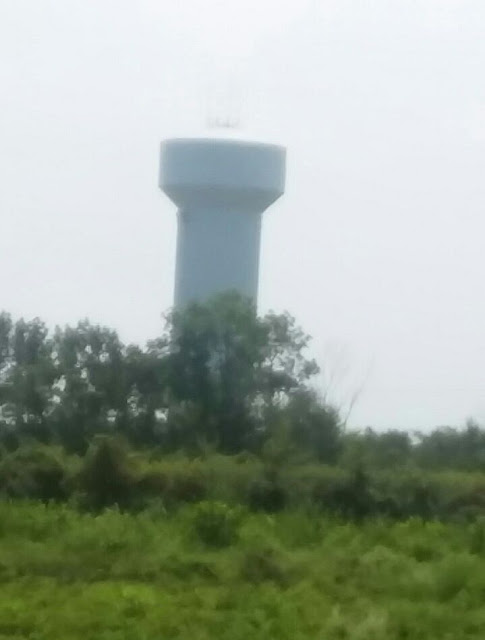 A tower sighting from a friend.

Then the leaves fell. Now that the light not only flashed much more brightly, but we could see the tower itself out there. Looming. Lofty. Large. It's tall. Much taller than we thought. Taller than the tall water tower that's much closer and sits in a direct line to the structure. Soaring into the sky like a rocket launch pad, "our tower" became even more intriguing. 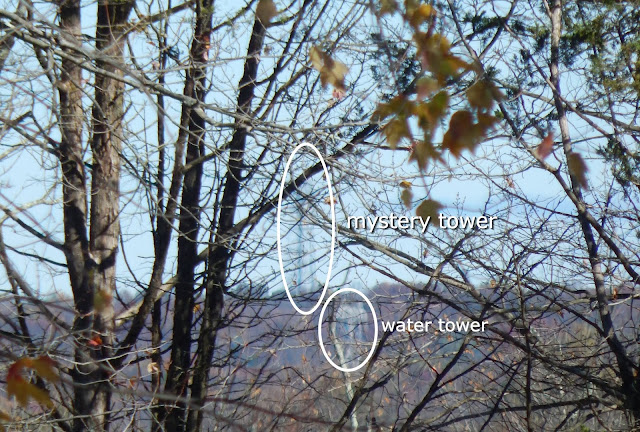 A clever friend of ours mused that it's likely a television network location and we took his suggestion and searched online for listings of local stations. We also studied maps. We got out a compass and stood on the porch and found due north. We learned that narrow, tall towers are very difficult to see from satellite pictures. Once we did find it it was clear from the shadow across the land that it is indeed very tall. It was time to find the beast! 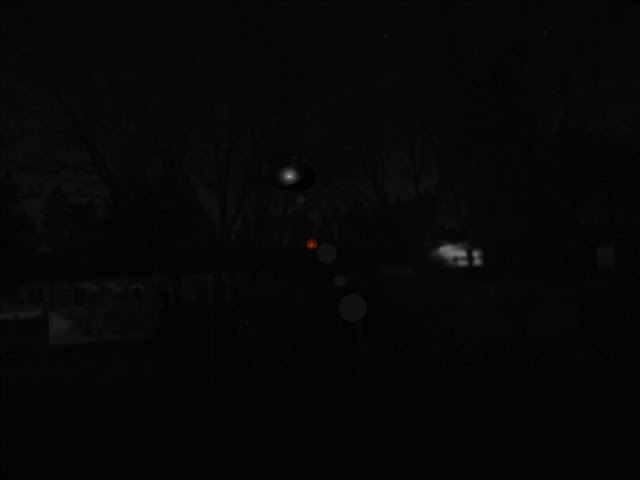 The lights flash day and night.

One afternoon we set off on our quest armed with an address close to the suspected tower, directions on the phone and the camera. 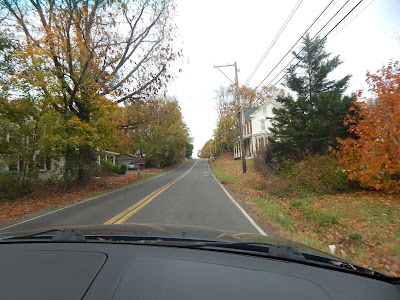 The scenery is beautiful and while Pat drove, I searched the hillsides for the structure. 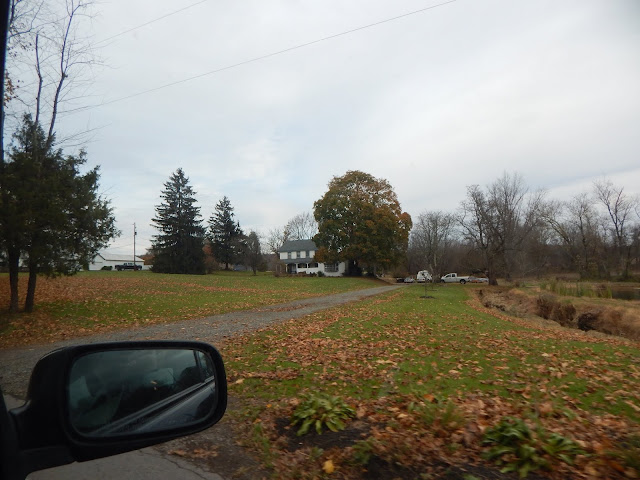 I also shot several missed pictures of the dashboard. 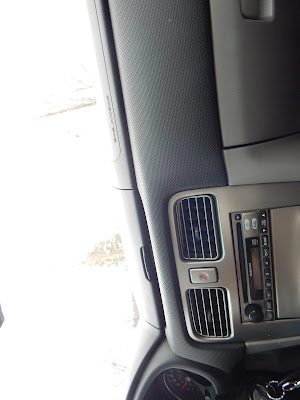 Then, we saw it! Off in the cloudy distance it was blinking softly. 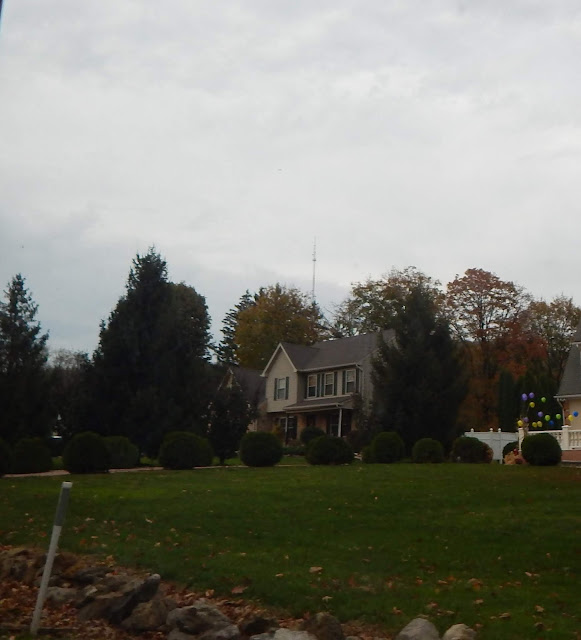 That's it! The mystery tower! 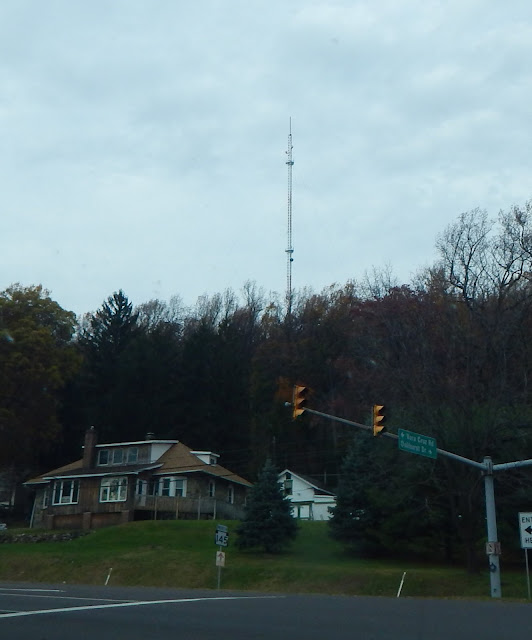 We pulled into a drive that leads right to it! Except there is a gate and a sign. Our friend, Bill was right. It is indeed a television transmission tower. 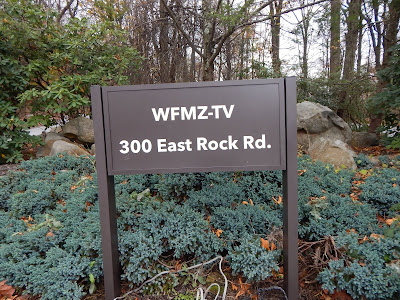 We pushed the button at the security gate and asked the voice at the other end for permission to come onto the compound and take closer pictures, but found that we needed security clearance and an appointment. But, we were close enough to solve our mystery. The fascinating structure stands 1,091 feet high on the mountain top, certainly tall enough to be seen from 16 miles away. The ride there was breathtaking and a wonderful excursion for a couple of folks enjoying the time and opportunity to do something as delightfully simple as driving off in the middle of the day to find a tower.

We did some research when we got home from our trip and found a couple of close up shots, apparently taken by someone with an appointment. 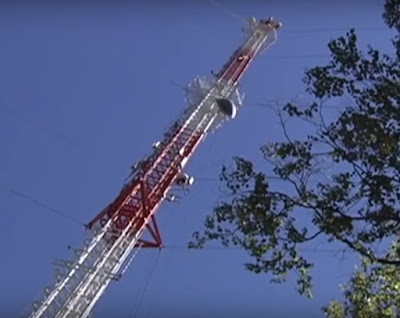 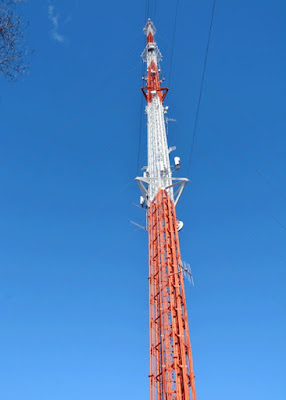 Posted by Nanette on November 03, 2019
Email ThisBlogThis!Share to TwitterShare to FacebookShare to Pinterest