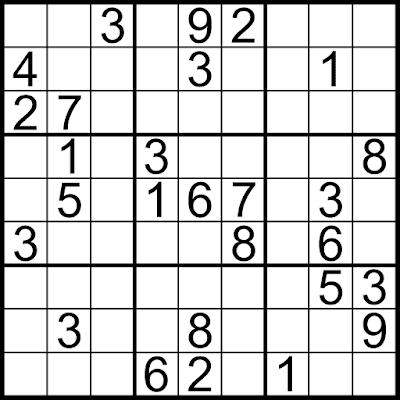 My husband is a puzzler. Give that man something to solve and his big brain begins to fire neurons and everything around him ceases to exist. He becomes entirely focused and will not rest until he finds the solution.

For example, there was the Rubik's Cube. We spent a few days visiting his parents and this perplexing toy sat on the kitchen table. Patrick picked it up, studied it briefly and then turned a section. It was about eight in the morning and he said goodbye to his father as he left for work. Pat gave the cube a second spin.

At six in the evening, when his dad returned, all but one of the rows had been solved. Pat looked up from his puzzle confused. "You're home already?" he asked Dad. "Yeah", the old man replied. Patrick scratched his head and set to finishing his challenge. In a few minutes, he set down the cube and announced, "There. It's done", and swore off ever touching another Rubik's Cube. Now, several years later I have to say I have never seen him with another one in hand. These days you can get online and find hints and even solutions for the game, but back then it was just brain cells. In our nearly 40 years together I have seen him behave this way hundreds of times over games and puzzles of all sorts. 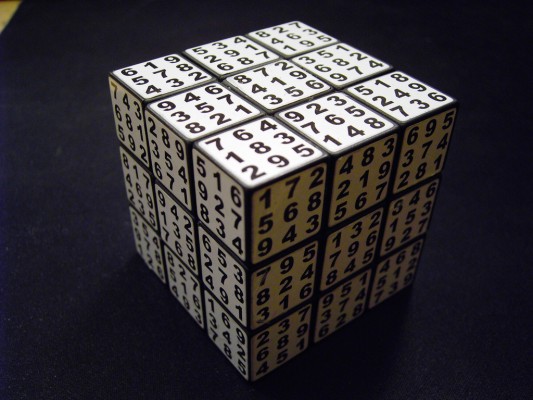 Do not even let him see the picture of this complicated Sudoku cube!

Now we're retired and finding our own rhythms and routines. In our new location, I'm watching the local newspapers and community booklets looking for new adventures to enjoy. One little magazine comes monthly and contains a puzzle page. The first month I copied out the Sudoku puzzle and fiddled with solving it over a couple of days. I had done these types of puzzles before, but never seriously and only in their simplest forms. I left the barely solved puzzle on the table.

Would I be exaggerating if I said I smelled smoke when my darling husband turned the paper so he could look upon it? Maybe. A bit. "What is this?" he asked. In my overly verbose way, I began to explain everything I know about Sudoku puzzles and how they are solved. "I can see how you would figure this out," he said only half-listening as he was already sucked in. And so it began.

Sudoku is great for us. It improves memory health and keeps those old-folk cobwebs at bay. It took a bit of effort and we learned far more about the puzzles than we ever would have imagined. We started by putting aside the more difficult ones I found in the magazine and cutting our teeth on beginner level puzzles. Now we are rocking and rolling! We've learned the names for cells and rows and how to form chains and have yet to find a puzzle we can't solve. Yet. I found a great site where we can get a new puzzle daily and instead of sitting at the lunch table every afternoon with no purpose we take on Sudoku. We learn, we bond, we exercise our brains and eat. Pie on most days. Life is grand.

Perhaps you'd like to do a bit of solving yourself?

Posted by Nanette on October 22, 2019
Email ThisBlogThis!Share to TwitterShare to FacebookShare to Pinterest