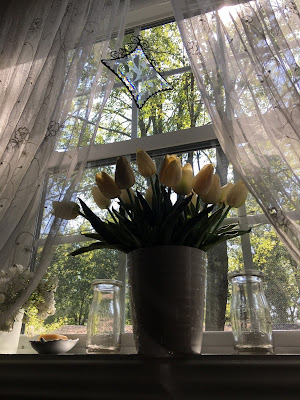 Good day! I've been asked to post a few details about my spice rack cart so here's a little history and info. In my previous home, I struggled for years trying to figure out the best way to store my sizable spice collection. I kept them in their original containers and tried tiered shelves, pull-out bins from the dollar store and a stacked lazy Susan. I wasn't happy with any of those. The jars and tins were always in a jumble and it was aggravating to have to go digging for a spice while cooking when sometimes all I needed was just a pinch for the right flavoring. Even worse was if the recipe called for a collection of flavorings since I had to dig through all of them. The kitchen was really small as well, so the cabinet space that the spices consumed was also an issue.

After some head-scratching, I ended up putting in a thin shelf that ran up underneath my kitchen cabinets. I invested in small jars from The Container Store and a labeling kit. It worked out really well! Not only were all of my spices within easy reach they became a lovely collection of jeweled colors I hadn't anticipated. Isn't it great when you have a vision for a project and it turns out even better than you imagined?


Look for them in the pictures here: Spice Jars

In my new home, the kitchen is gorgeous and has tons of cabinet space. But even so, I didn't like the idea of how much space all of the spices would take up and once again having to invest in racks and shelves in order to arrange my collection. As a result, they ended up being one of the last items to be unpacked when setting up the kitchen. At the same time, I had two nice rolling carts that I kept shuffling around. They were handy while moving into our new place, loaded with tools for hanging pictures etc. and cleaning supplies. Once we were beginning to get settled, the carts were in the way and the spices were still in boxes. That's when I put my spice jars into one of the carts as a temporary resolution. This accidentally ended up being genius! I like accidents like this as well! 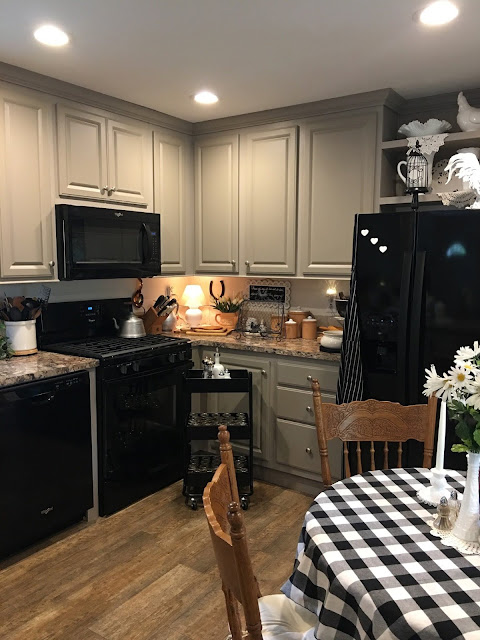 
These little carts have gained lots of popularity over the years. IKEA makes one called the Raskog that even has its own Facebook page for its fans. There are tons of knock-offs. Mine came from Michael's craft shop. I have seen them used as nightstands, work tables and crafting carts. They're so sturdy I've seen one with a heavy old sewing machine on the top rack. Most of them have a screen in the bottom of the shelves so they stay clean and dry. 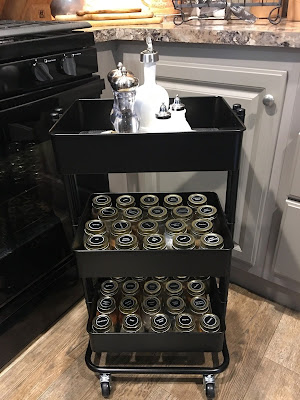 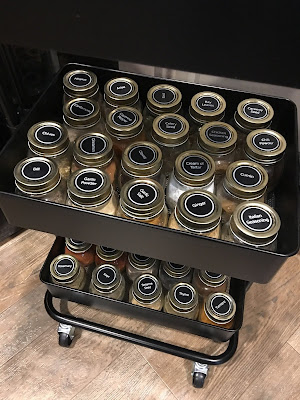 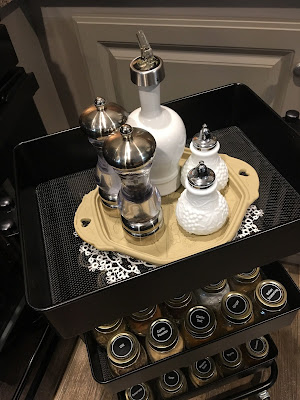 As an accidental spice rack, this is perfect. It rolls easily around the kitchen so it's right there if I need any spice. In the top I keep salt and pepper and an olive oil dispenser, in a pretty clay tray, that I might have otherwise kept on the stove. In the cart, the spices don't get heated being near to the stove. When I'm not using it I scoot it out of the way. Because it's good and strong I even use it for temporary storage. I have a cast iron wok that weighs a ton. It's huge and I don't like to have to lift it in and out of the cabinet so it lives in the oven when not in use. When I am using the oven I park it on the cart. 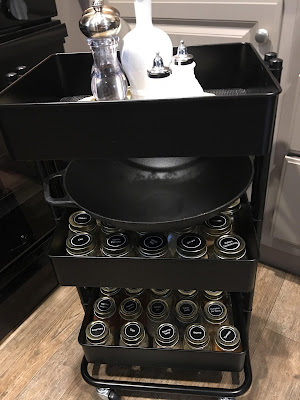 This little bit of decorating luck has worked out really well for me. I have no plans to move the spices from the cart ever!

Posted by Nanette on August 22, 2019
Email ThisBlogThis!Share to TwitterShare to FacebookShare to Pinterest