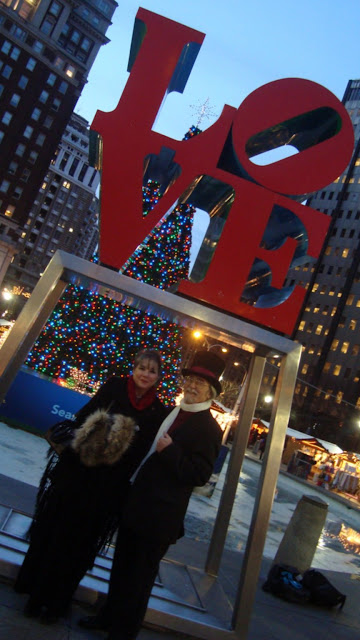 On the way to the last of his holiday gigs before Christmas my creative husband asked me if he was corny. I had to smile. My answer was a resounding yes and I think that is what I love most about him. He is a singer and an artist and a designer and a perfectionist. Except for the perfectionist part, and admittedly even that sometimes, I would not change a thing about him.
This time of year he is in full tilt. Sometime back a dear friend put him in touch with the Philadelphia Parks Department and he began playing at their Christmas Village in Love Park. As with everything he does in life he threw himself into the show. He has a magnificent top hat he bought years ago in the Mad Hatter shop at Disneyland. He spent every dime in his pocket for it and when he pulls it out I know that it's going to be a real occasion. He asked me to find him a scarf, a white one, and to put a colored ribbon on the hat. He dug out his suit and assembled his version of a Currier and Ives ensemble. Then he learned twenty-some-odd holiday songs with gusto. If he was going to play a Christmas Village, he was going to do it up right. 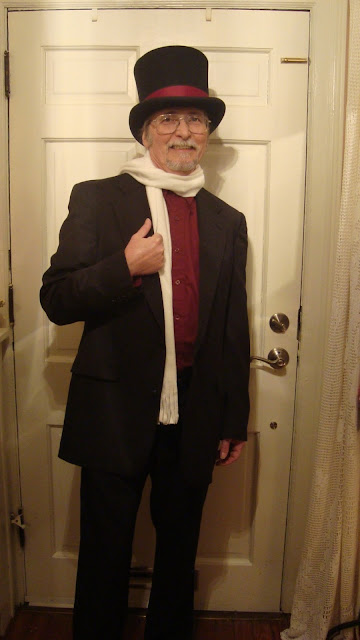 We don’t venture into the city very often anymore and so that first year we had to guess how long it would take to get there and exactly where in Philadelphia Love Park was located. We parked a few blocks away and he popped on the top hat and grabbed his guitar. We were off on another adventure. 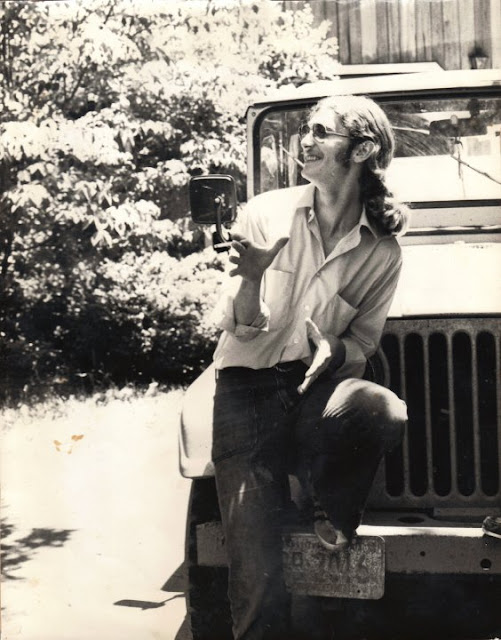 When I first set eyes on him in 1979, I was having a drink with a friend at a local restaurant in Bethlehem, New Hampshire. He had come in after work for a beer and we were introduced. He was growing out his thick head of hair and had tried to contain it into a pony tail. He was lanky and spirited and it was clear he was comfortable in the place. I didn’t know then that he was a local musician and had played in the restaurant for several seasons. He got his drink at the bar and joined us in the booth. Although I was not fully aware of it at the time, I realize now that I fell in love that night. Everyone else left the booth and he and I talked for hours. We had common friends and he was living in a crazy house I had once rented in town. We had plenty to talk about, but there was much more. The rest of the world faded away for those few hours. It was not too many days later that I realized that I had been looking for this man all of my life. 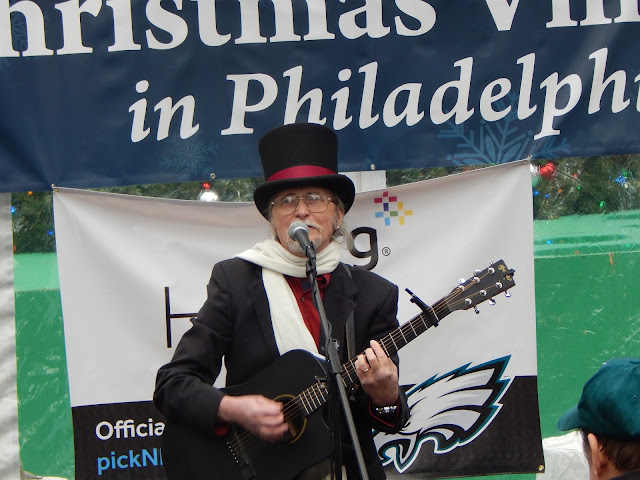 I have followed him on nearly every one of his musical adventures for over thirty years. He has played Love Park for four years now. The holiday spirit builds in him as he stands looking up at historical Philadelphia City Hall. One year he decided to memorize Dr. Seuss' story “How the Grinch Stole Christmas”. He printed it out and began reciting it. Everywhere. He was the Grinch in the shower and driving in the car. The words, “little Cindy Lou Who,” echoed throughout my house and in a shocking few days he had memorized it all. The first night he recited it in front of an audience in a local coffee house the onlookers were as wide-eyed as toddlers. So was I. He is a singer and a story teller and he made it magical. 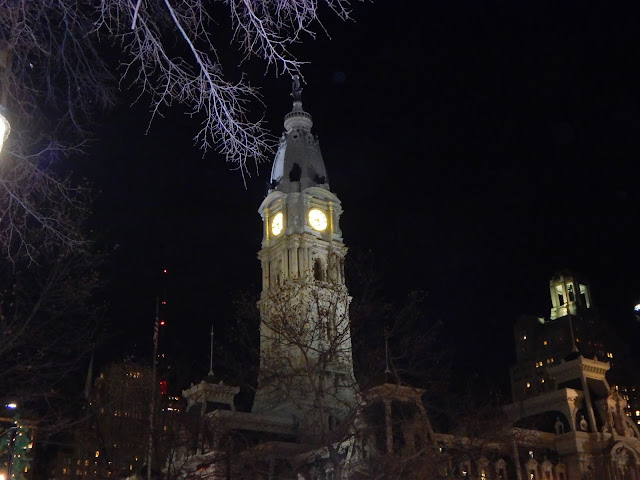 This holiday season has been no exception. Again he played below the clock of beautiful city hall and was invited as well to the Christmas Village in Baltimore's Inner Harbor. There the village is inside a huge tent and he was center stage amid the stands serving bratwurst and bacon jam on an unseasonably warm day. He took that holiday spirit that grew inside of him while he practiced his holiday songs and “hitched up old Max,” and he poured it out to an appreciative audience. Last night he did it again. 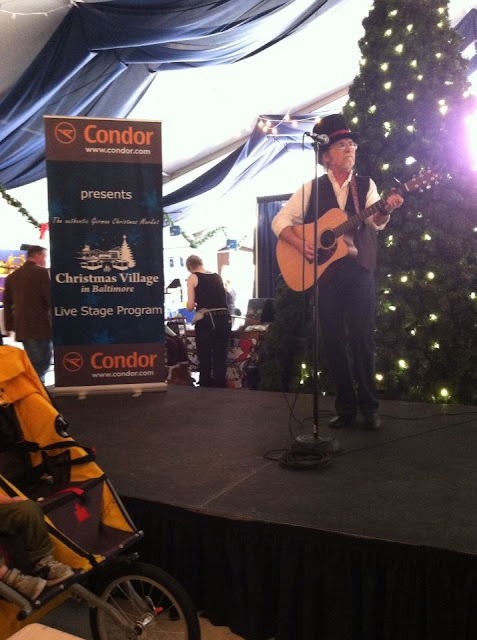 In a comfortable diner, not too far away, family and friends and fans gathered. They wore red shirts and warm scarves and they were festive and excited. They came for hugs and smiles and to hear him play. Pat insists he will not record his show. He must do it live. With his partner and bass player at his side, a talented clarinet musician and our youngest daughter, they sang the carols of the season, Blue Christmas and O Holy Night. And, after we all had clapped and sang along his fellow performers moved themselves into the audience and he turned up his microphone and told us all the story of “The Grinch”. He said the words, “Maybe Christmas, he thought, doesn't come from a store. Maybe Christmas, perhaps, means a little bit more” and I, like many others, felt a lump in my throat and a tear in my eye. It is what we all came to find. Maybe it is corny, but maybe it is the holiday spirit. Maybe it is love.  I know he does it because of all of those things. He loves to perform and he is compelled to share. Every face that looked up and listened last night, and every hand that clapped, gave all the love back to him.

As I watched him lugging out his heavy equipment at the end of the night I could see that he was tired, and relieved. He had put in a lot of himself and, as always, he made me proud. Proud that he is so moved to share himself and proud that again and again I am fortunate enough to follow. Corny? It's just about the best thing in the world. 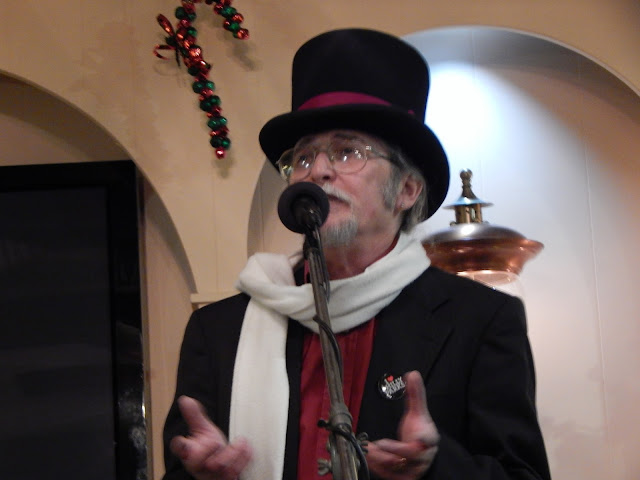 Merry Christmas to all!

Posted by Nanette on December 24, 2015
Email ThisBlogThis!Share to TwitterShare to FacebookShare to Pinterest