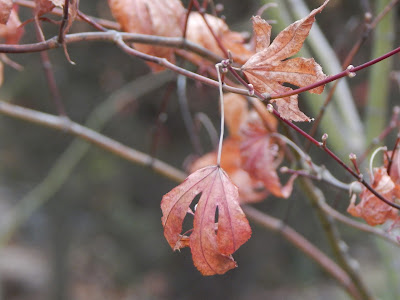 Last December I accepted a Facebook Pay-it-Forward challenge. If you're unfamiliar with pay-it-forward it's a good deed generating process based on the movie of the same name. One person does a good deed for three people who are then each obligated to a good deed for three more people and so on. I agreed to send a small gift within the upcoming year to the first five folks who responded to my post and agreed to do the same themselves. Four wonderful people signed up and I put a lot of thought into what gifts I could send to each of them.
I made a scarf for my brother, Leo​. I haven’t seen him in many years and in my mind he is eternally twenty-one, tall and lanky. That’s how he was when I saw him last. He likes to fish. Big game fish. What does one make for a big game fisherman that he might enjoy? I don’t tie lures (do you use lures in big game fishing?) so I made him a scarf. Not just any scarf, but a liar’s fisherman scarf. I called it: “The One That Got Away” and I sent it off. Honestly I thought he wasn’t’ quite sure what to make of the gift until one day some time later when the mailman delivered a huge double box of famous See’s candy. It was a thank you from Leo. I am big fan of chocolate in general, and definitely in handmade chocolate candy and even more especially in See’s candy, but there was much more. Our mom loved See’s, especially their California Brittle pieces. As I opened the box I recalled the first time she gave up her favorite California Brittle to me so that I could appreciate its delicious, crunchy wonderfulness. My brother Leo had sent me much more than chocolates, he had sent me a memory. I was deeply touched. 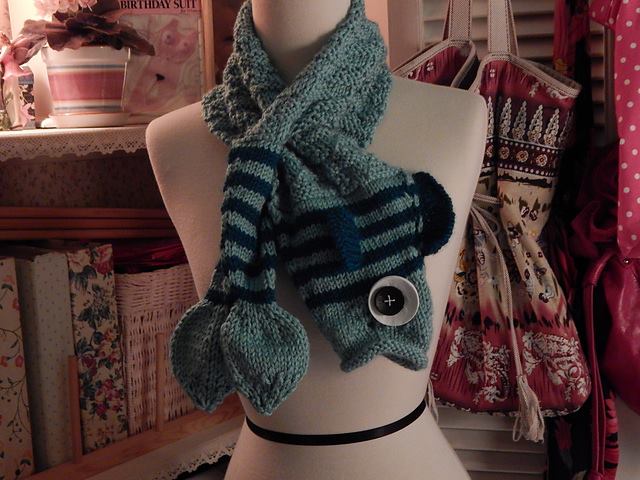 The One That Got Away

I then turned to the remaining three gifts. I struggled somewhat, wondering what I could make for people whose homes I had never visited. Carrie-Lou had been a classmate many years ago and we had lost touch. Anna is a fan of my novels and I had met her only once at an arranged book signing. Donna and I have never met in real life, only on Facebook. I decided that instead of fancy, frilly gifts that might simply collect dust, I would send something practical for everyday use.
Recently Donna became a grandmother. As we all know, with bundles of joy come many other bundles as well, diapers and bottles and clothes and toys. My daughter hangs a granny-square bag I made at the bottom of the stairs to catch all those little bits. For Donna, I made two. 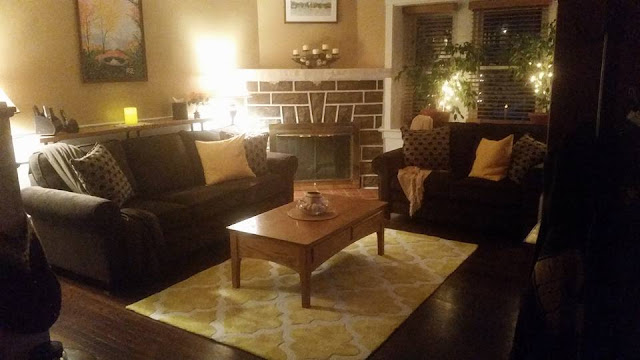 My daughter's lovely home with the granny-bag hanging from the stairs in the far left foreground.

For Anna and Carrie-Lou I wanted something they could also use every day. On my loom I made them handwoven kitchen towels. Like a good apron, a good towel is a great helping hand to have in the kitchen and in life.
I packaged the gifts, took a walk to the post office and sent them off.
A few days later I received a heartfelt note from Donna saying she had gotten the granny-square bag. Apparently she'd had a rough day at work and the package on her step was just the thing to turn her day around. I was touched to hear she was so pleased by my simple gift.
When the kitchen towels reached the other side of the country Carrie-Lou and Anna both contacted me. The packages had arrived at a time when they each needed a lift and they said I had helped brighten their holiday season. Again I was moved by their show of emotion.
And so I come to the thank you's. Today is the day for them, isn’t it? The day we stop and reflect on how fortunate we are. Through all of the hustle, bustle and hassles stop, for just one brief moment. Pull those people you love close and tell them thank you. I know in my heart they'll love hearing it as much as you'll love saying it. Happy Thanksgiving.

Posted by Nanette on November 26, 2015
Email ThisBlogThis!Share to TwitterShare to FacebookShare to Pinterest