Before the Parade Passes By 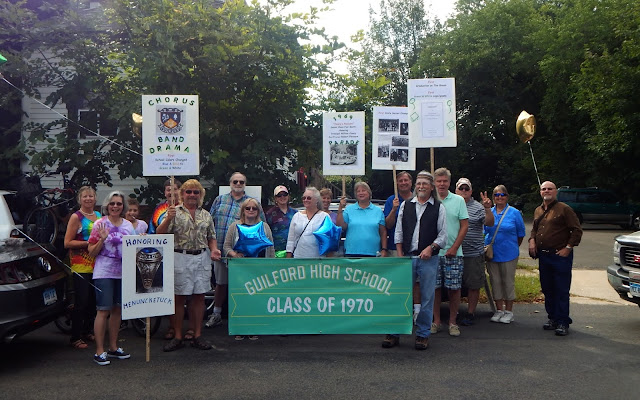 This past weekend my husband and I took a trip up to beautiful New England to attend his 45th high school reunion. The class of 1970. You might gasp and think, surely no one was alive then! Not only were they alive in 1970 but many of them they are enthusiastic and energetic and very much still kicking today. The entire experience was delightful. As a fly on the wall at their gathering I was afforded the opportunity not only to partake in the celebrations but also to step back and observe as well.
The eager reunion attendees met first on Friday evening in a local eatery and watering hole in beautiful Guilford, Ct, the town where they had all graduated those many years ago. At first it was a bit tentative for us, although my husband attended Guilford High School for a couple of years, we don’t visit up there often and he needed a few minutes to recognize old familiar faces. That did not last. Soon everyone in the crowd, and there was certainly a large turn-out, was shaking hands and embracing one another. Even wearing my name-tag that read, Guest, I was as warmly greeted as the attending classmates. The affability was more endearing than I can express. I cannot recall ever being in a group of folks where I was welcomed so completely.
I grew up in Southern California, far from sweet New England, in a city where I never once felt I belonged. I have lived all over the country and even after many years still do not feel as if Pennsylvania is quite home to me either. More and more I share my husband's feeling whenever we visit his beloved Connecticut. The people we joined this weekend all showed me the true reason he often speaks of “going home”. They are a genuine group that treats everyone like family. In that charming town we found a collection of old friends from a generation that prided themselves on being their own people. They respect one another for their differences. They have now seasoned that with a gift of long lives and experience. I never met a nicer group. At age sixty-plus they are survivors of the best kind. They still are a generation of love.
In between Friday and Saturday evenings of socializing and reminiscing, the class joined in the town parade, thanks to some admirable planning by the class organizers. While two other reunion classes hired a flatbed for riding, the sturdy and determined graduates of the class of 1970 walked the entire route. I will long consider that simple, hometown parade one of the high points of my life.
They met at nine in the morning, a short distance from the town green, took up their position and prepared for the parade. The group had a nice Ford Mustang and great spirits. In that hour before the parade actually began there were jokes and smiles and warm remembrances. 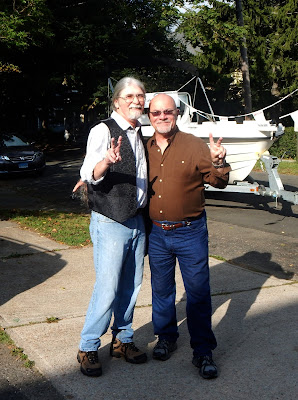 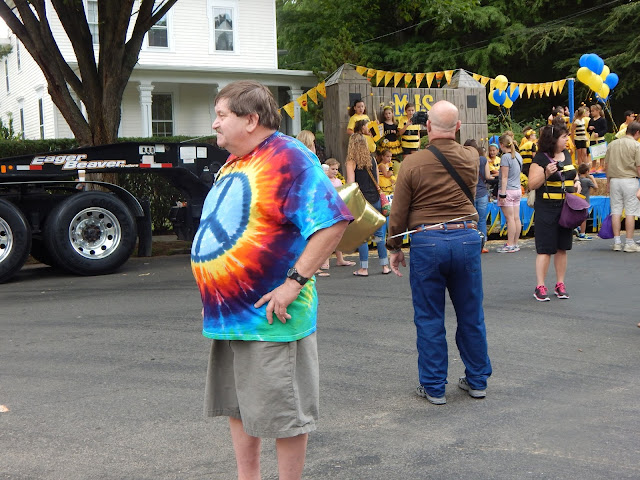 Tie-dye shirts for the parade. 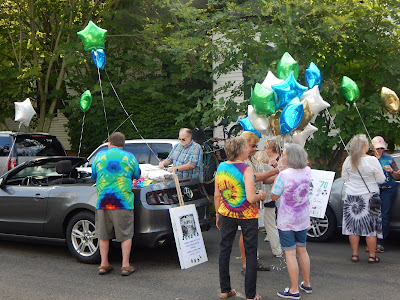 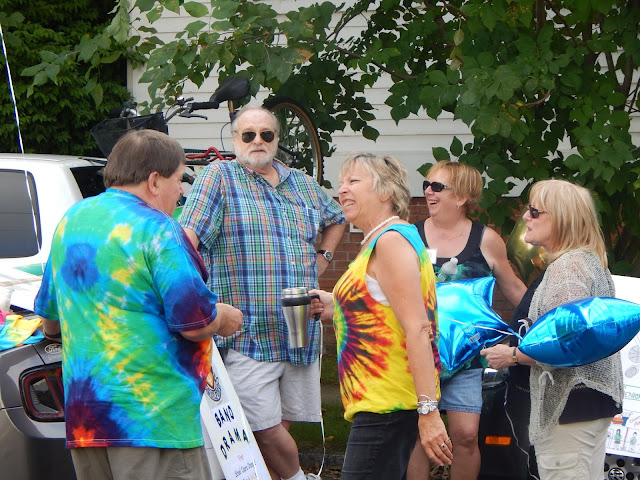 Smiles and characters from a special generation. 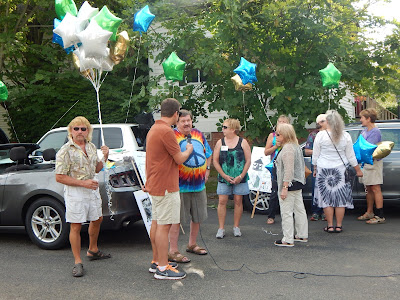 An interview with the local news. 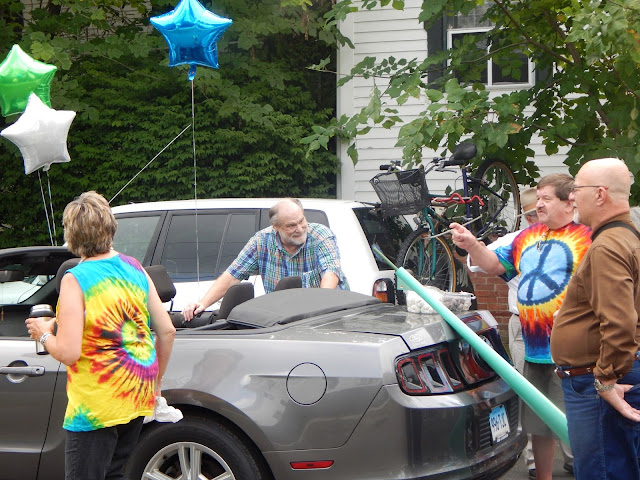 A bit of pre-parade planning. 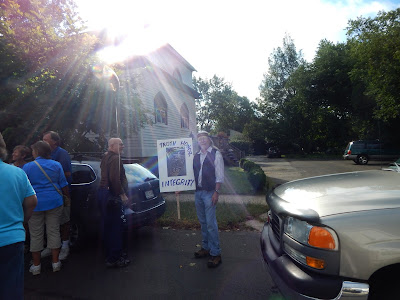 My husband in his parade garb. 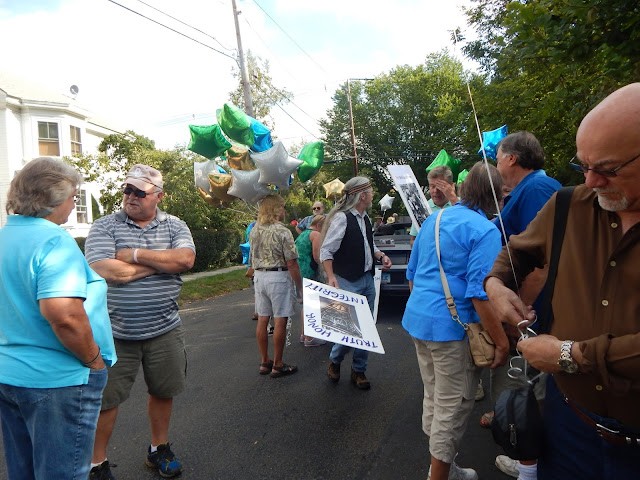 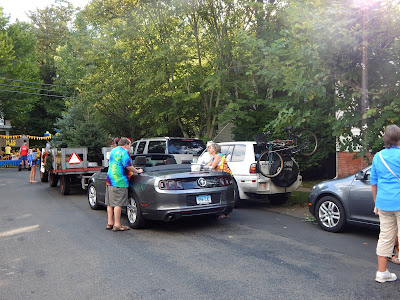 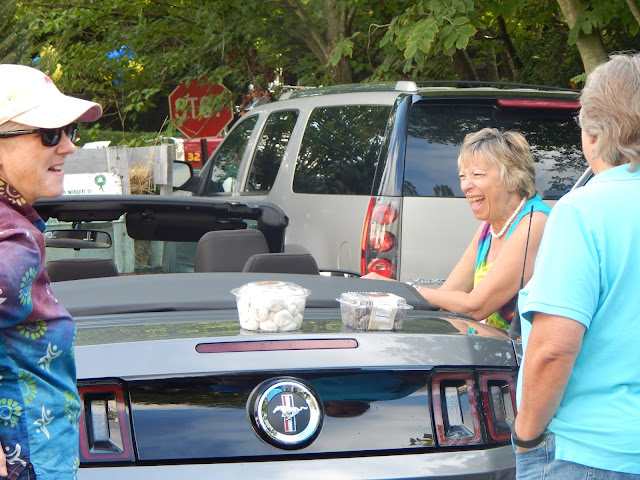 How to get folks from the 60's to follow? Little powdered donuts, of course! 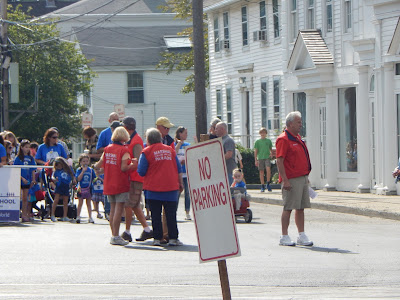 The parade marshals hard at work.

Just before the marching began I ran ahead and took a collection of photographs and was able to watch the town parade.
Along the tiny streets of the center of Guilford, surrounding the town green, the residents had collected. It seemed that half the town took on the role of spectators while the other half was marching. It was quaint and historical and a true slice of perfect Americana. There were simple floats and jugglers. In traditional New England fashion they marched to the beat of fife and drums. 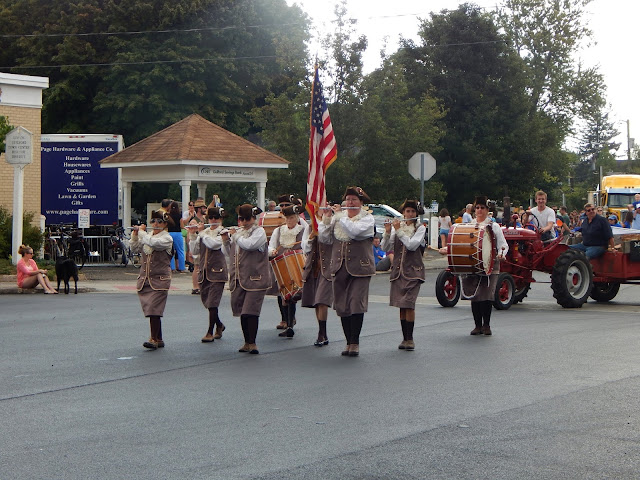 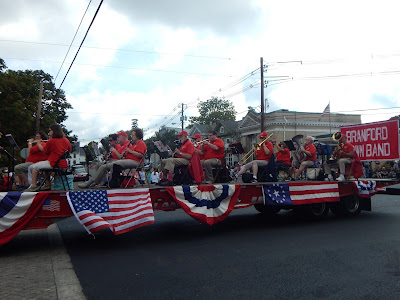 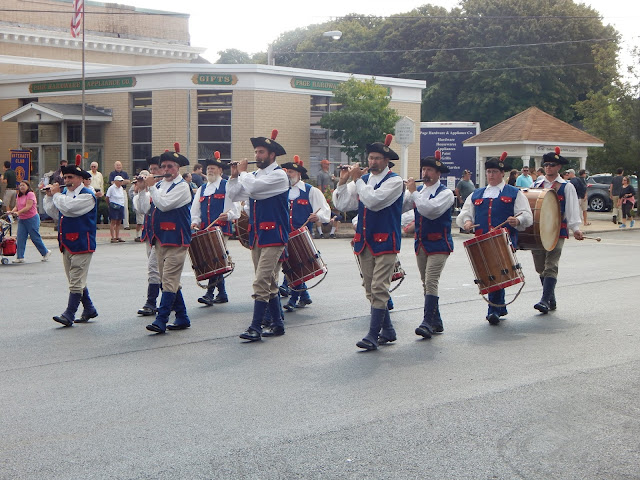 There were young couples arm in arm driving their tractors, a new generation of American farmers. There were children with fiddles, delightful elderly ladies from the historical society and a baby that looked as if he was driving a tractor trailer, clapping and cheering out of the cab window. I can imagine he will be a part of the parade for many years to come. I saw proud boy scouts and a town band. I was part of a delightful celebration and I felt included. 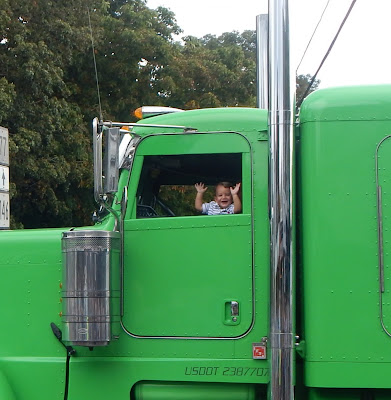 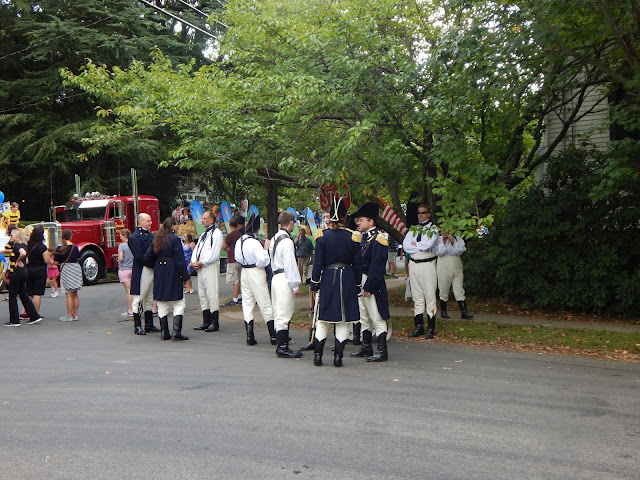 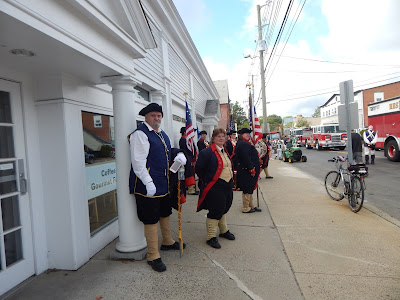 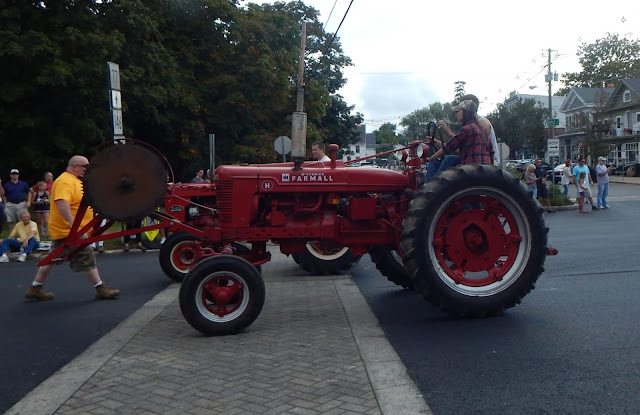 A group of lovely, local ladies beside me cheered and clapped and thanked the local firefighters as a rather large collection of engines rolled along. The ladies were so enthusiastic I was moved to thank them for sharing their love of their home town. All of it made me feel as if, for just a little while, I too was home. 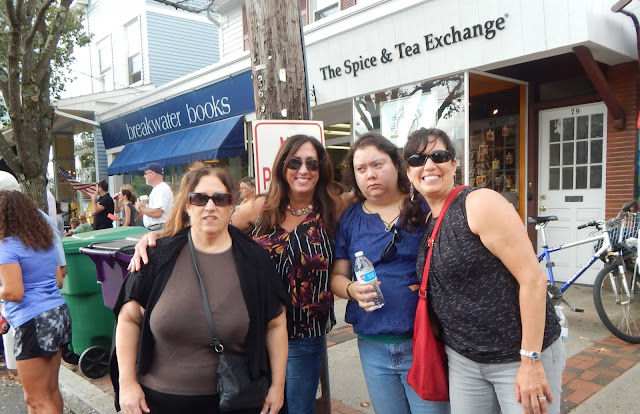 The best cheering section at the Guilford parade!

Eventually the class of 1970 appeared. They strutted along with smiles and hometown pride and I was thrilled to be, not only a witness, but in many ways a participant of their celebration of life and their love of living. 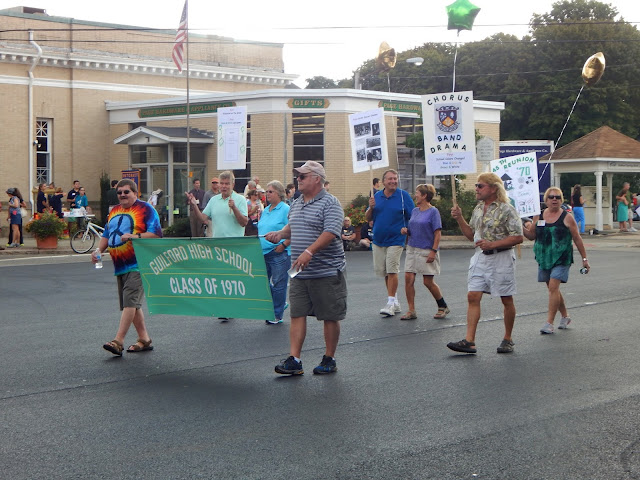 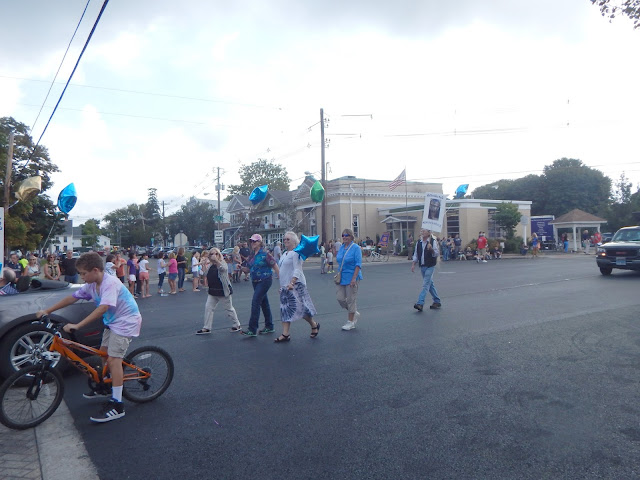 This weekend I too went home. I was welcomed into the arms of the fine folks of the Guilford High School class of 1970. They gave me a bit of their hearts, their lives, their heritage and their love of home. I came back to Pennsylvania with a little bit of New England in my heart. Long after the parade is over I will hold that memory in my heart. 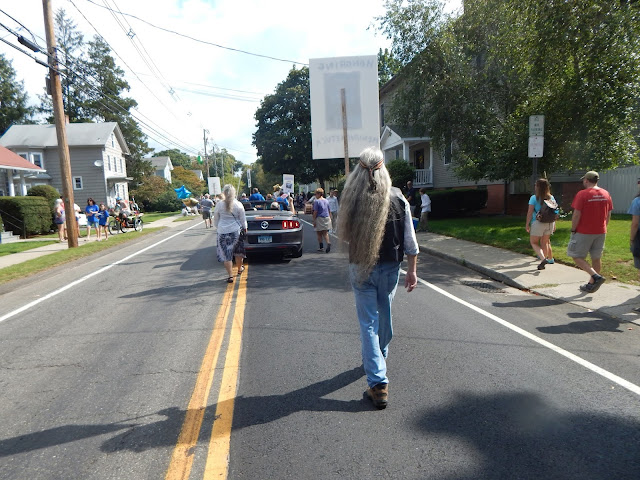 Click here for a video snippet of the parade

Posted by Nanette on September 20, 2015
Email ThisBlogThis!Share to TwitterShare to FacebookShare to Pinterest