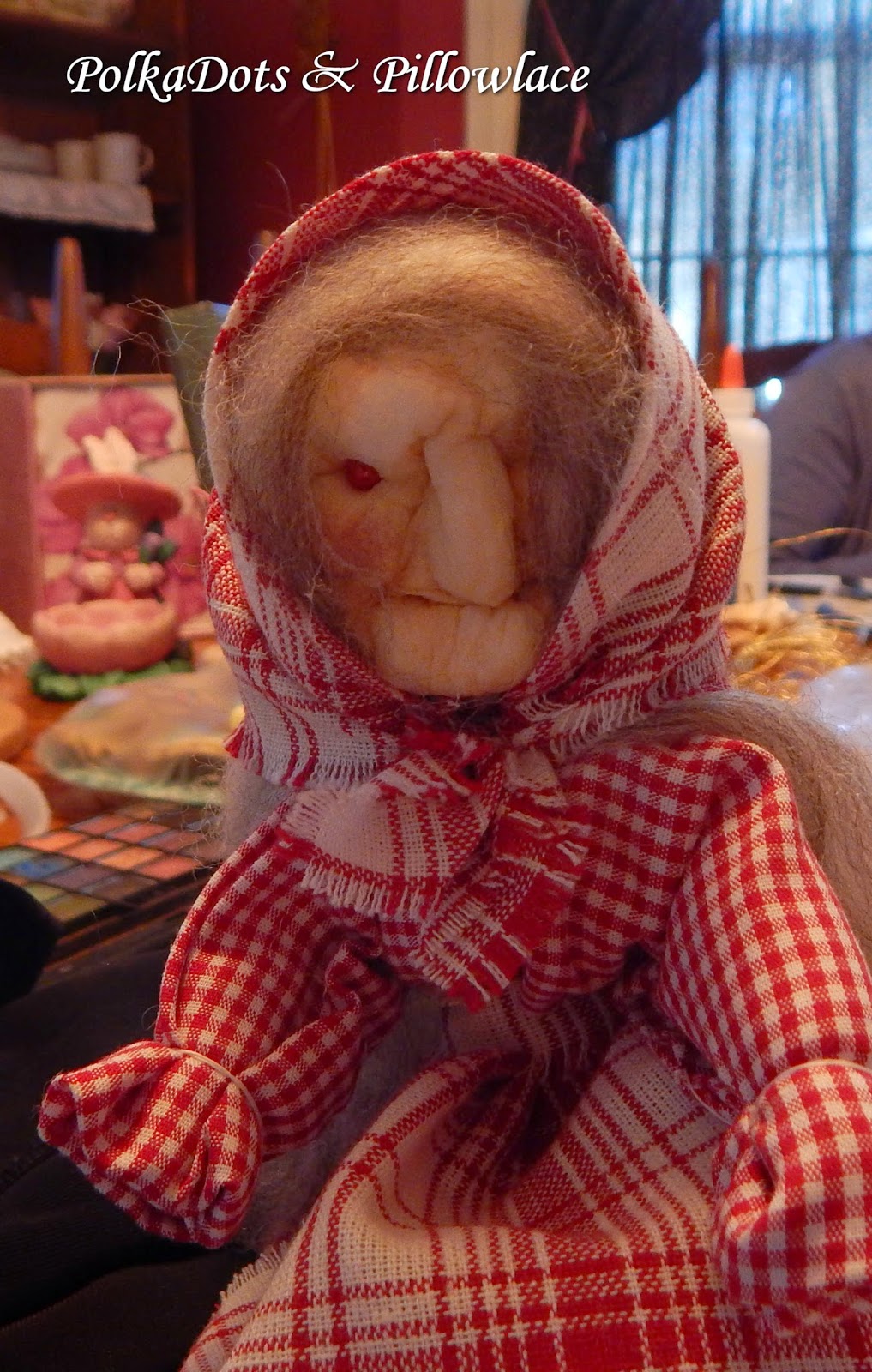 When I was a young girl I visited my Aunt Pat and Uncle Leonard in their beautiful Santa Monica, California home. They had no children at the time so their house was a far cry from mine, where I lived with my five noisy siblings. They had a well-cared for Pomeranian named Topaz and their house was adorned with fascinating bits of art. Aunt Pat’s father made little wooden mice and stunning little chapels cut from thin veneers of wood. Their house was perfect. The kitchen was filled with earthy brick and blissful quiet. They are kind and gentle people and I was thrilled to hear they had a daughter sometime later who has grown into a beautiful woman with children of her own.
One strong and cherished memory that stands out clearly in my mind is the day my Aunt Pat showed me her "apple head people". She explained to me how someone had taken the time to carve the shape of a face into the apples and then allowed the tart, round fruit to dry. It wrinkled and turned brown, giving them detailed and ancient expressions. I swore one day I would make one of my own.

Time passed and I never got around to it until one day when I happened to spy an old dusty kitchen witch in a friend’s pantry and became inspired. A kitchen witch would be the perfect use for an apple head!
As far back as the late 1500's the Scandinavians kept these handmade dolls, sometimes called Cottage Witches, in their kitchens to ward off bad luck. The legend says that these old crones will save one from burnt roasts and boiled-over soups and they were given as gifts to bring prosperity to the home. I'm a sucker for a great conversation piece and an unusual project and I never would turn down some good old fashioned luck in the kitchen. 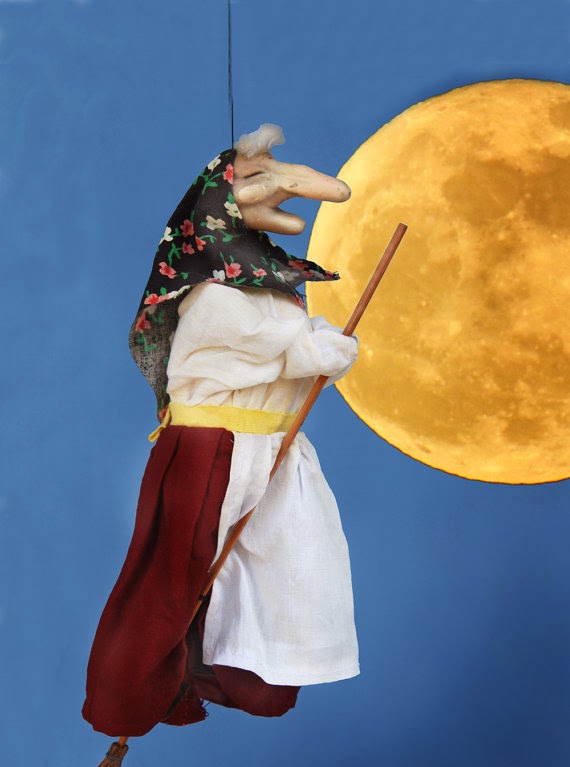 I gathered a few apples, and my good friend, Fay, from up the street. Armed with sharp paring knives and determination, we set to carving heads. We went for a very basic shape thinking that wrinkling would add witchy personality to our creations. We cut them and then soaked them briefly in a mixture of lemon juice and water to keep them from spoiling.


It's blurry, but it shows an apple, freshly carved. 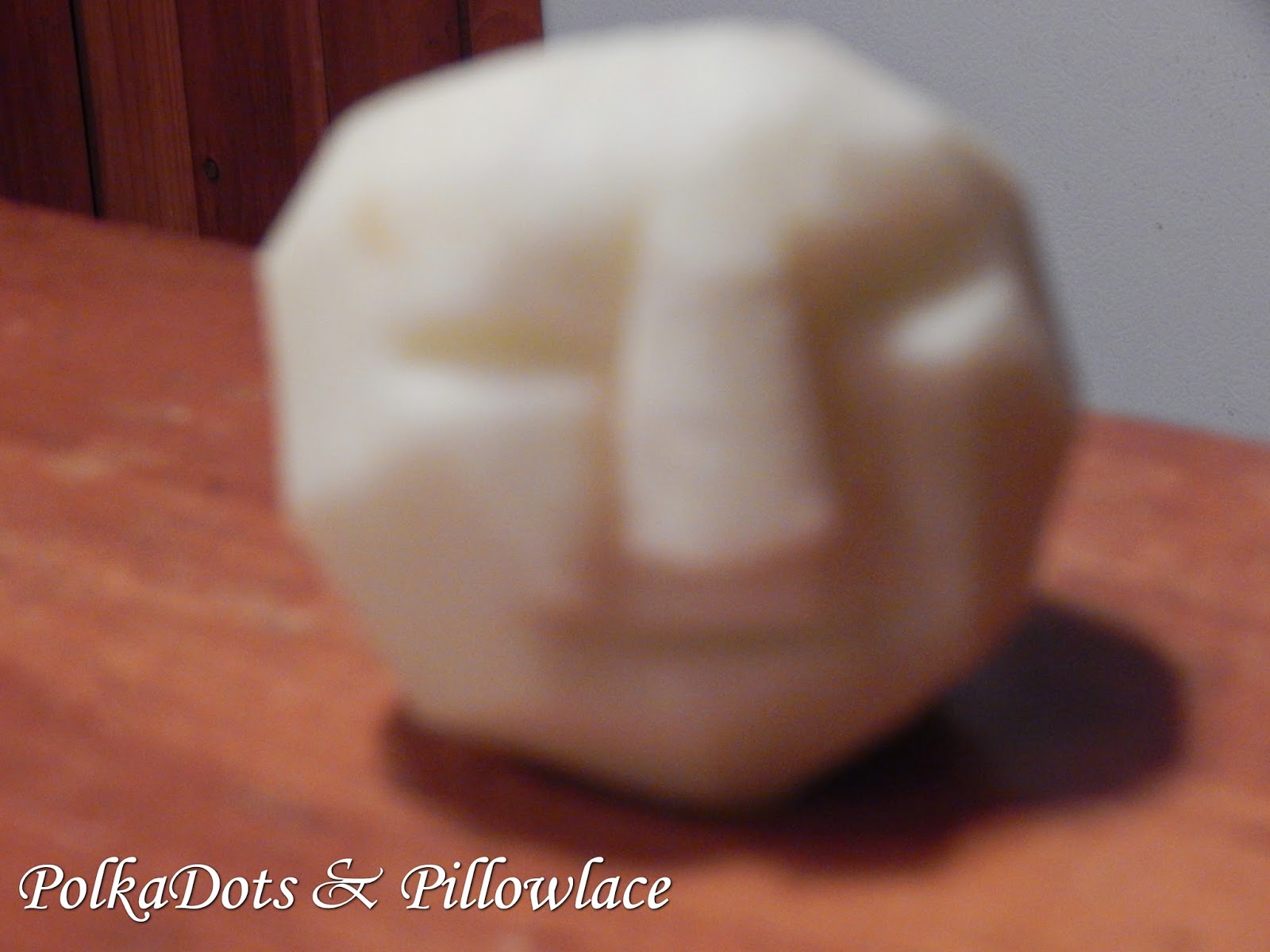 Then we waited for the fruit to dry. The carved heads did indeed age, and shrank a bit too much, so we carved a couple of bigger, harder apples. Here they are at different stages of drying. Each one took on a personality of its own. Gala apples shrunk much more than the Macintosh.

Galas on each end and the Macintosh in the middle: 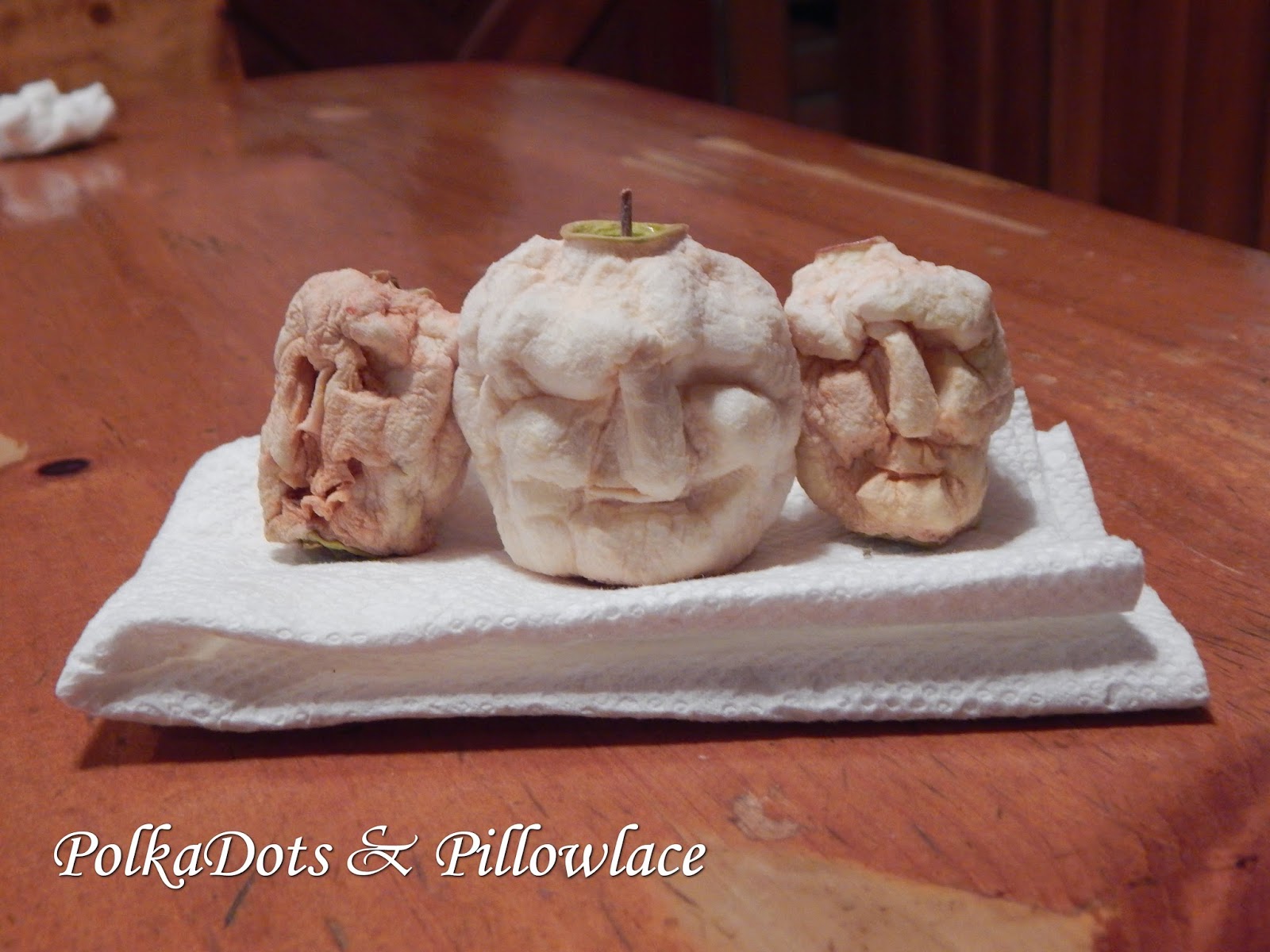 They sat for a few weeks on Fay's windowsill. She got to watch the day-to-day drying since she has a lovely sill (of which I am quite jealous), and I do not. It was the perfect excuse to meet over several weeks in her warm and wonderful kitchen to check on the drying of the heads and enjoy a cup of tea. After about five or six weeks, when the apples were dry and about as pliable as a marshmallow we proceeded to make them into dolls. We gathered the heads and supplies and met at the table in my big dining room.


By now the heads were much smaller and far more wrinkled. Fay gave her's eyes during the drying process: 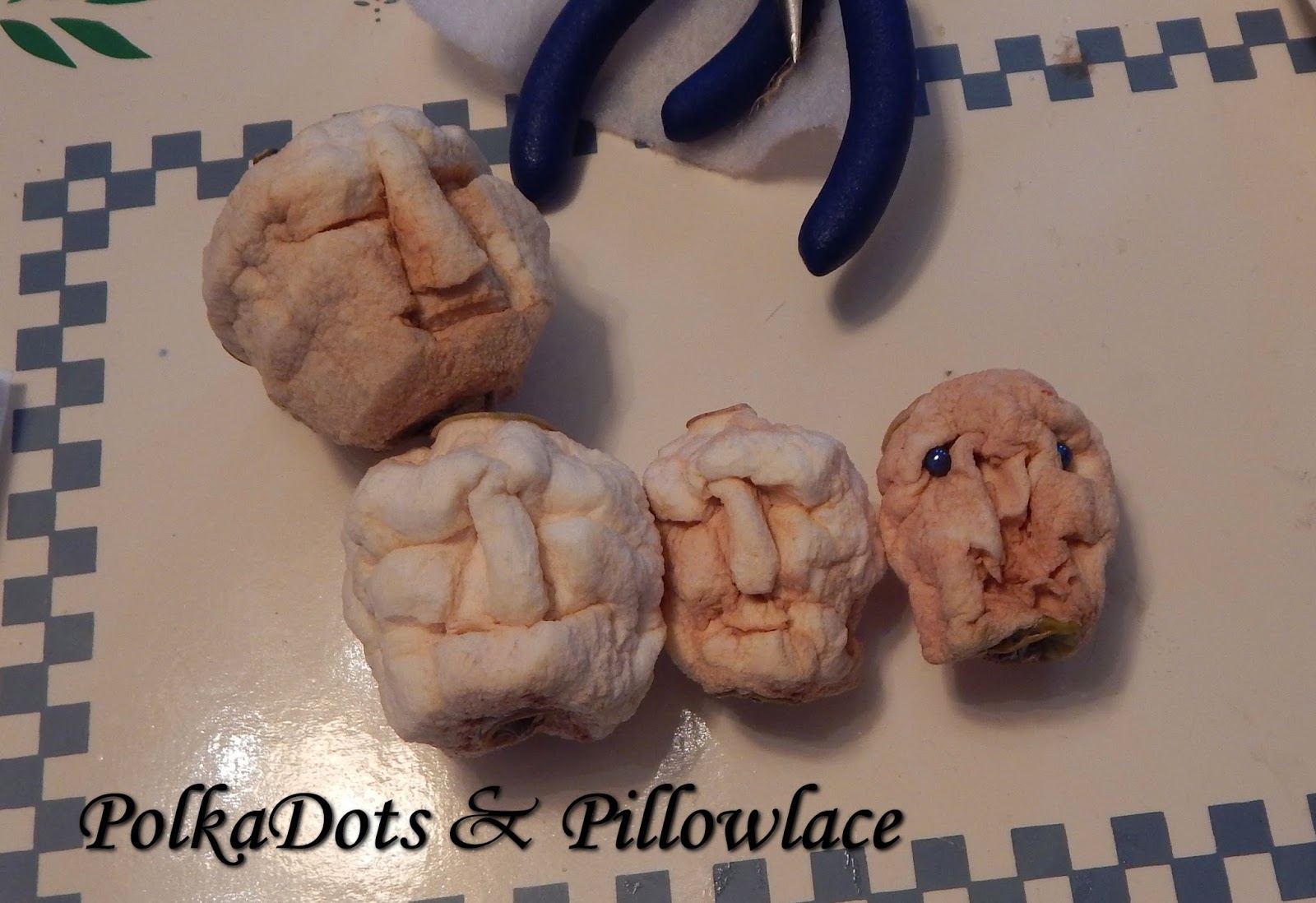 We took old wire hangers and shaped them into something resembling a stick figure with a long neck: 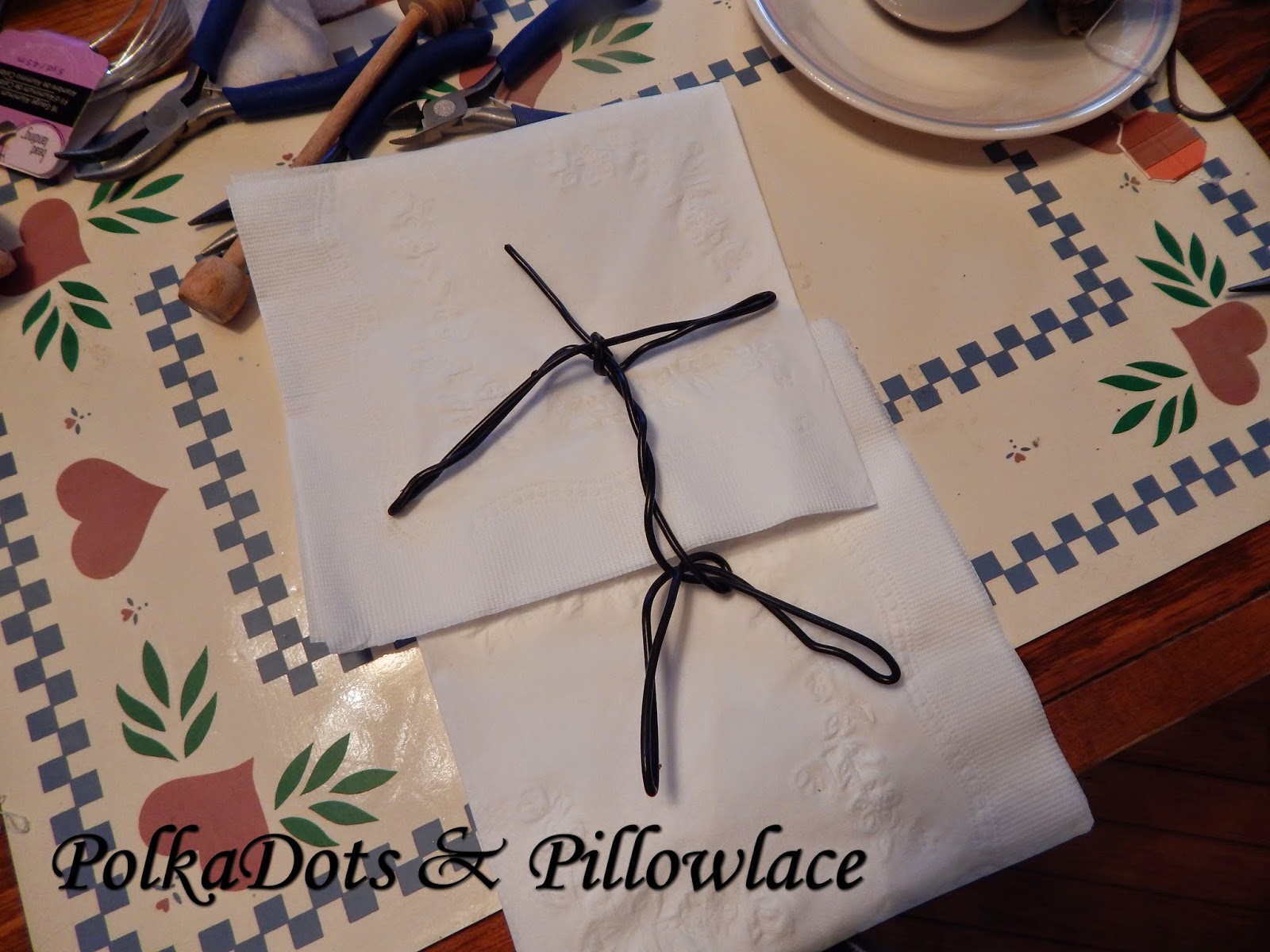 Then we wrapped them up like little mummies with polyester batting. The batting I had on hand was the iron-on type that has a rubbery backing. The batting worked really well since it just clung to itself as we wrapped: 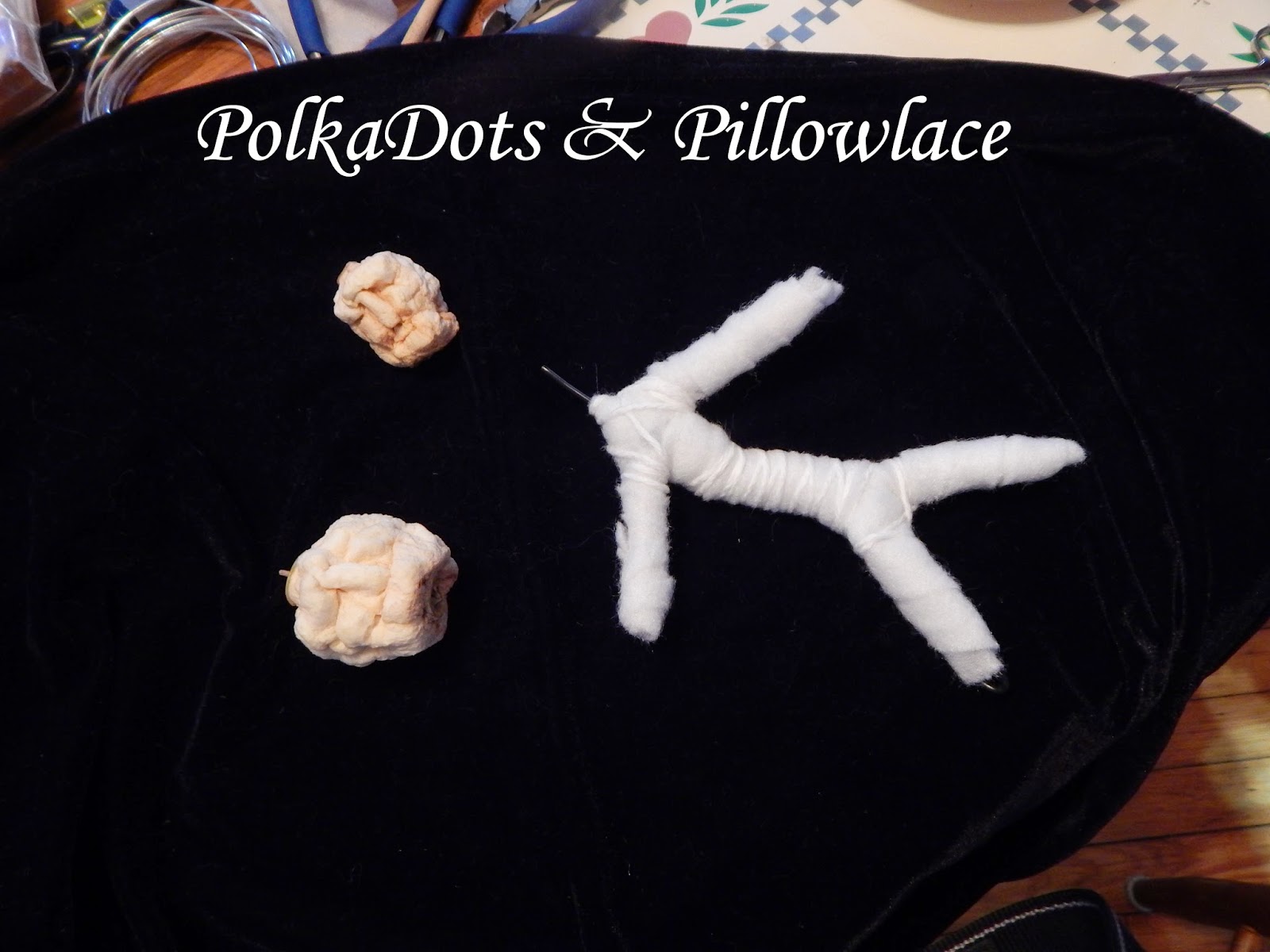 Now it was time to dress the witches. We cut fabric by eye and just sewed it directly to the batting: 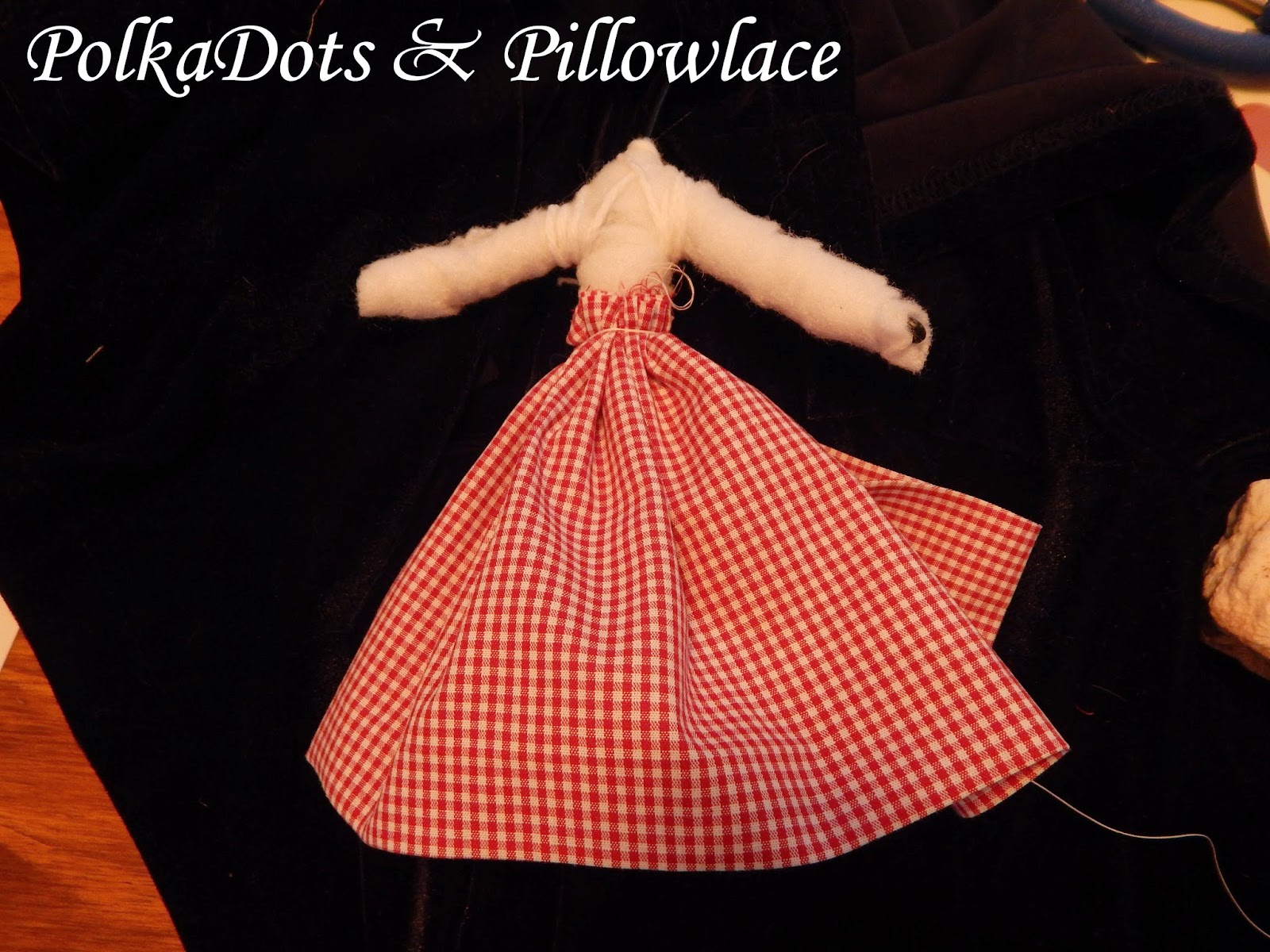 For the bodice I cut a long strip of fabric, cut a hole for the neck and sewed the underarms. I chose a red gingham scrap to match my kitchen and Fay went with fabric with a rose pattern. We added a few other bits, aprons and such: 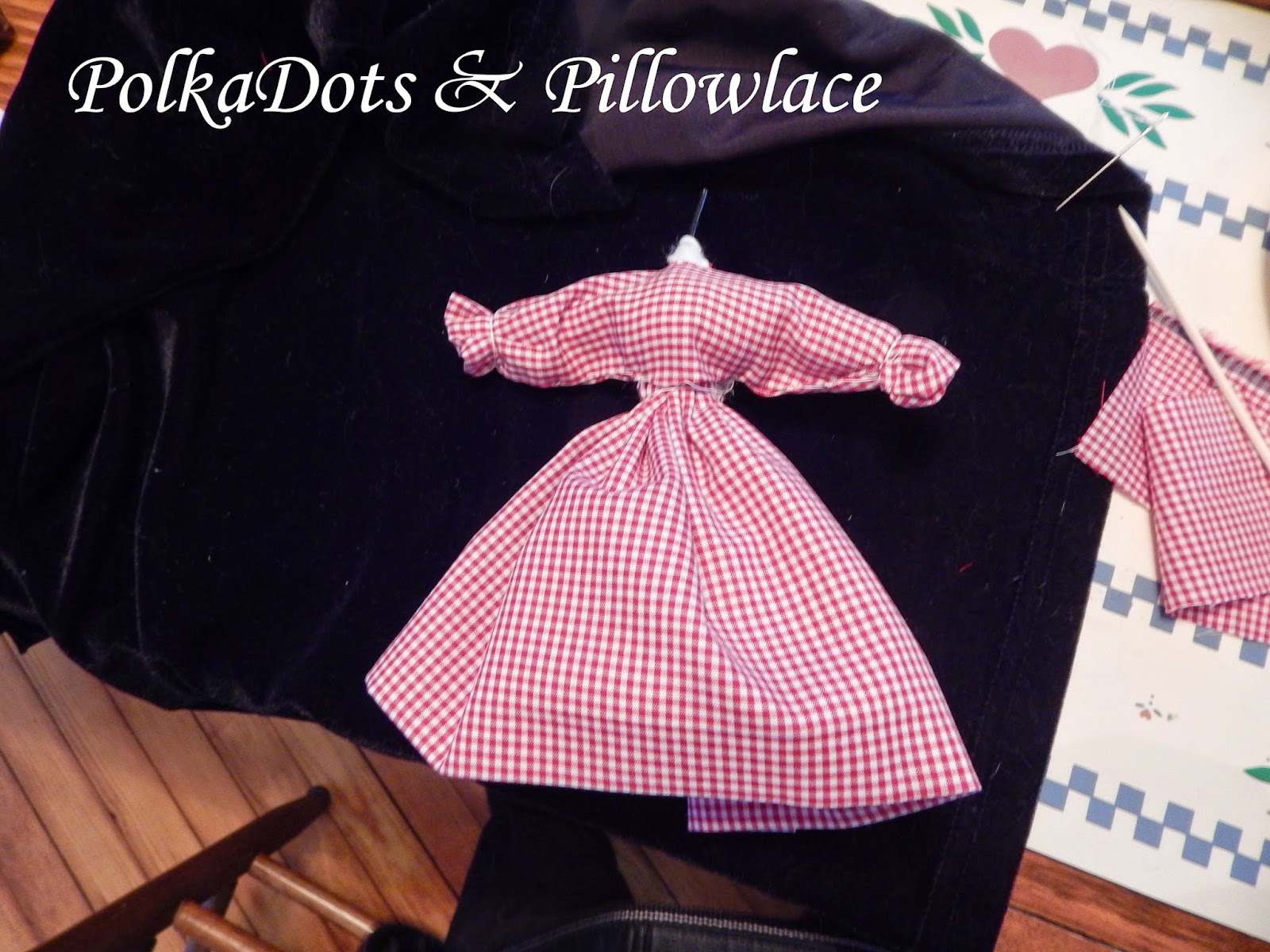 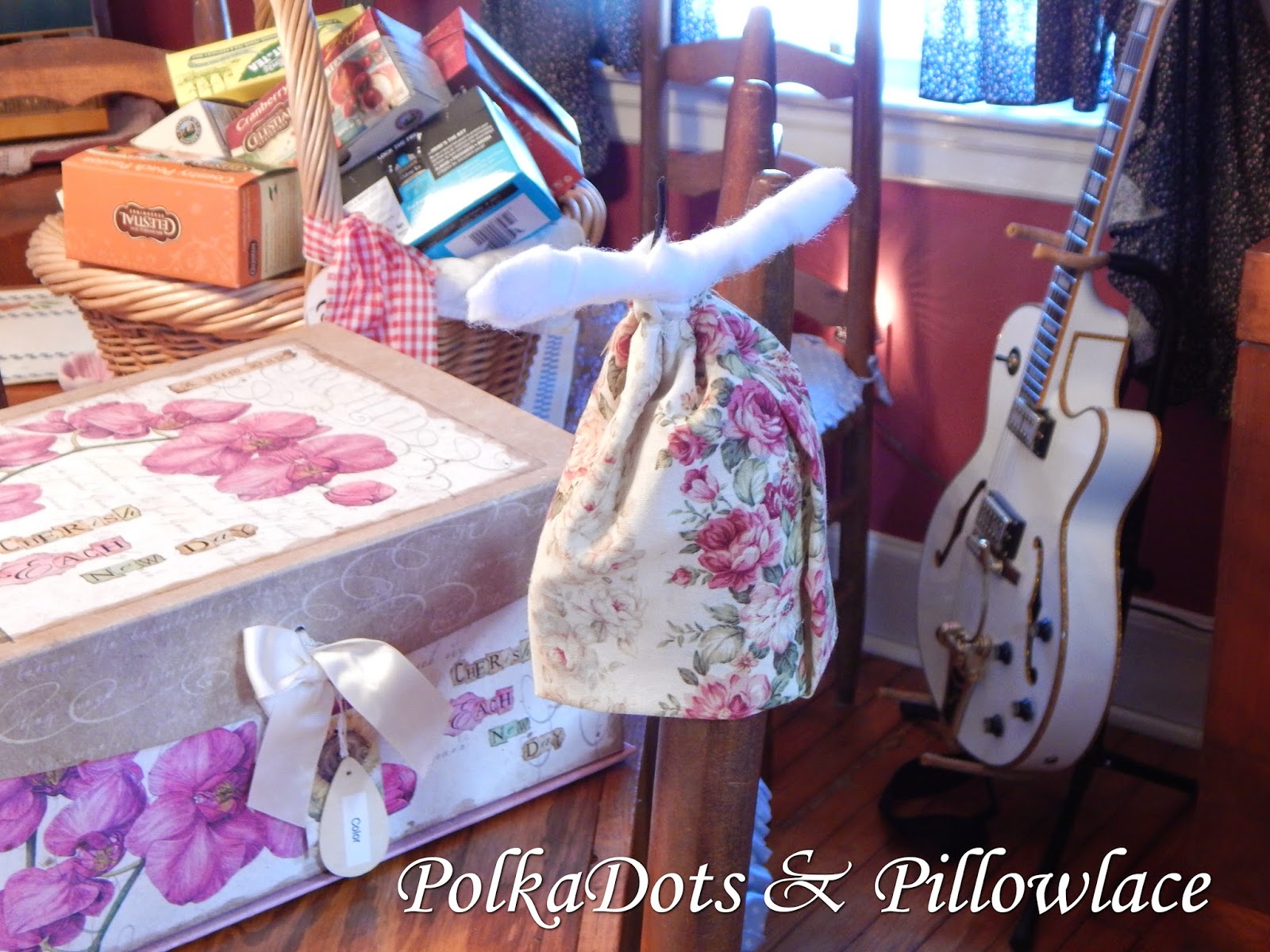 Now it was time for heads! 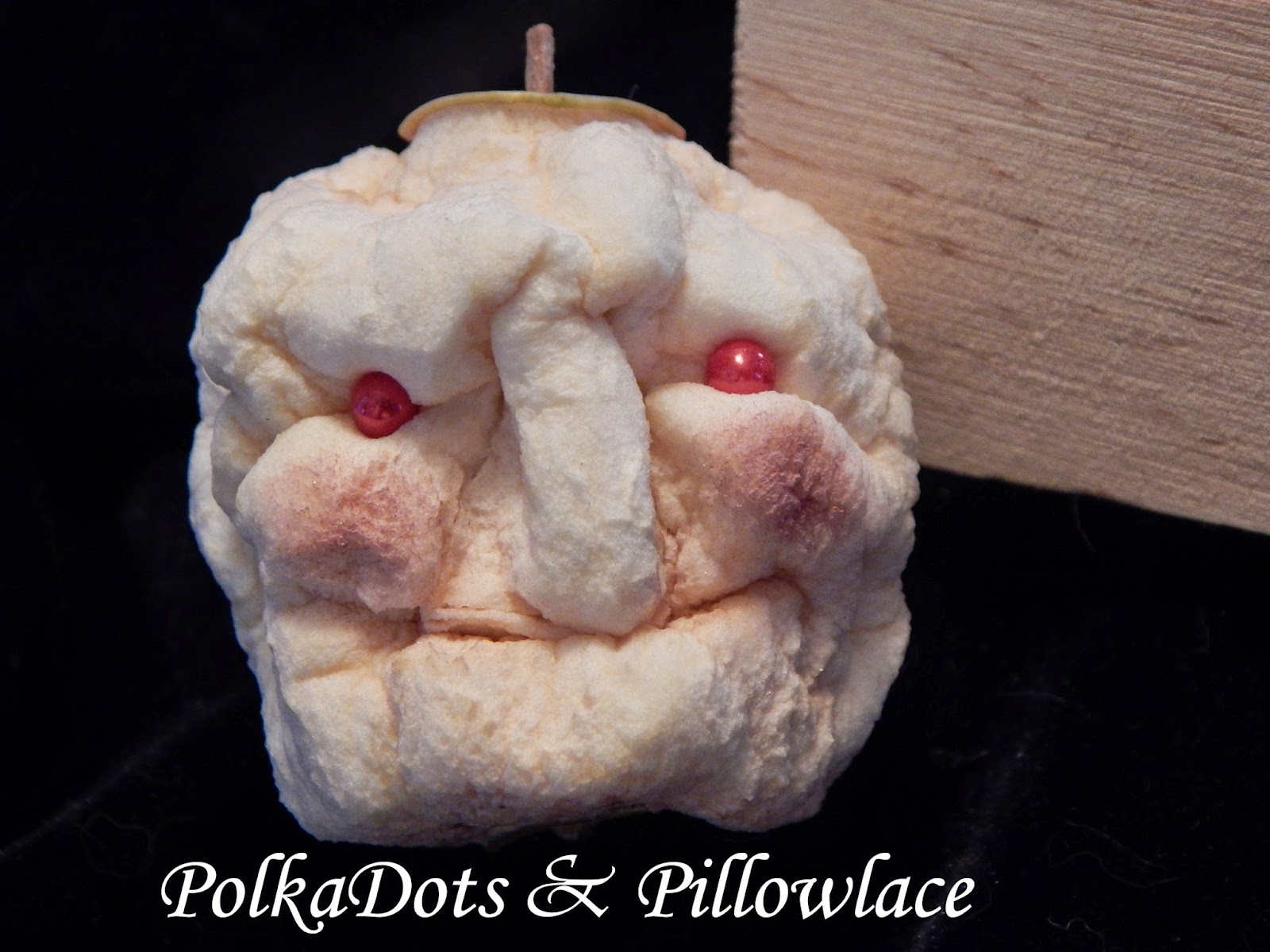 Fay brought over these great pearl pins and we snipped them with wire cutters so the pin was not too long for the heads and shoved them in as eyes. At this point the heads were a bit rubbery and the eyes closed around the pins. It was great fun and a bit scary, seeing the apple heads seem to come alive. I chose red eyes and Fay put blue in her witch head. I also added a bit of powdered blush. We poked a hole into the bottom of the apple head with a bamboo BBQ skewer, added a gummy fabric glue and stuck the head in the wire necks of our stick figures. A bit of wool roving made great hair, also secured with fabric glue: 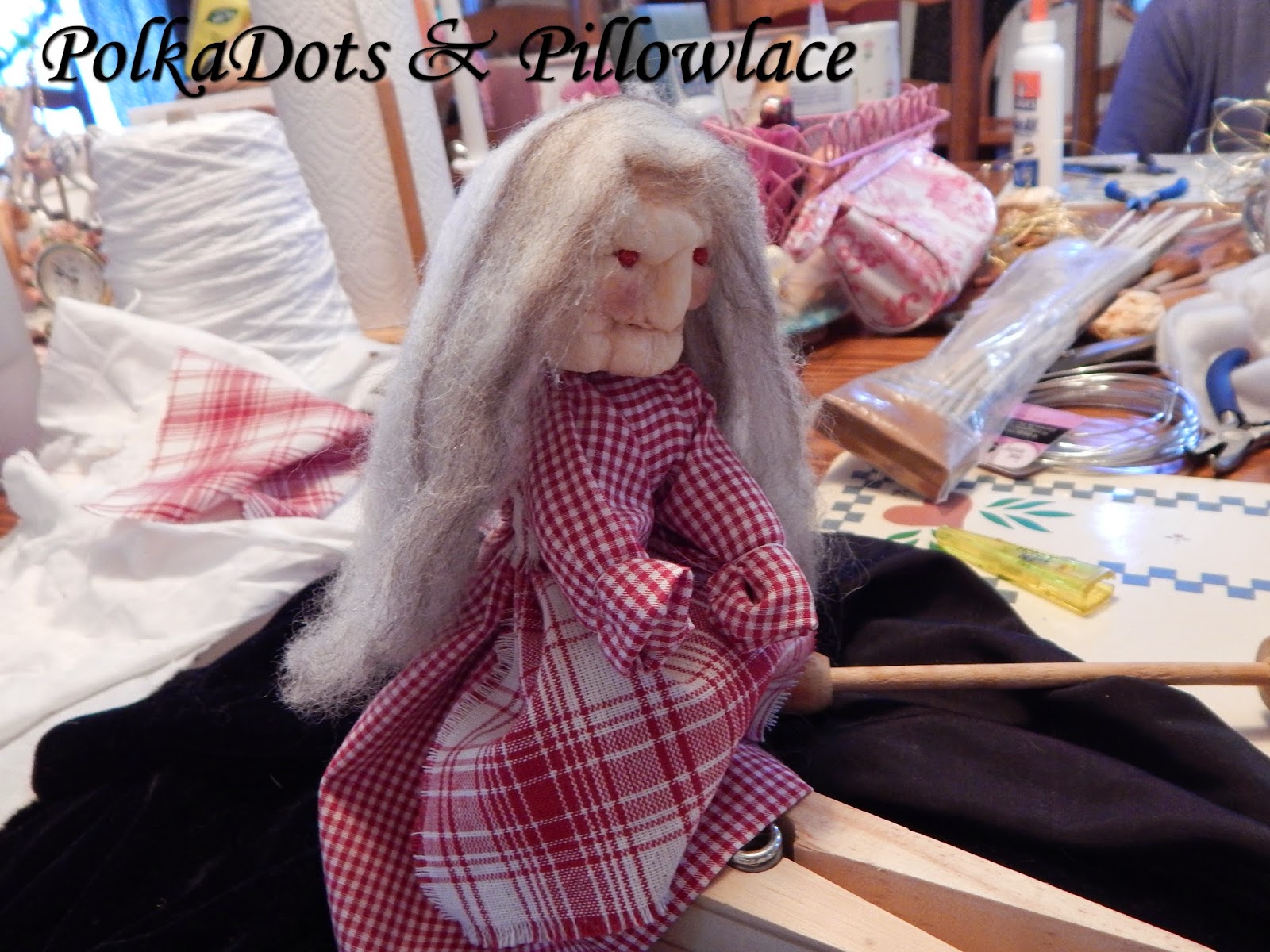 Now they needed scarves sewn on at the neck. Even scarier: 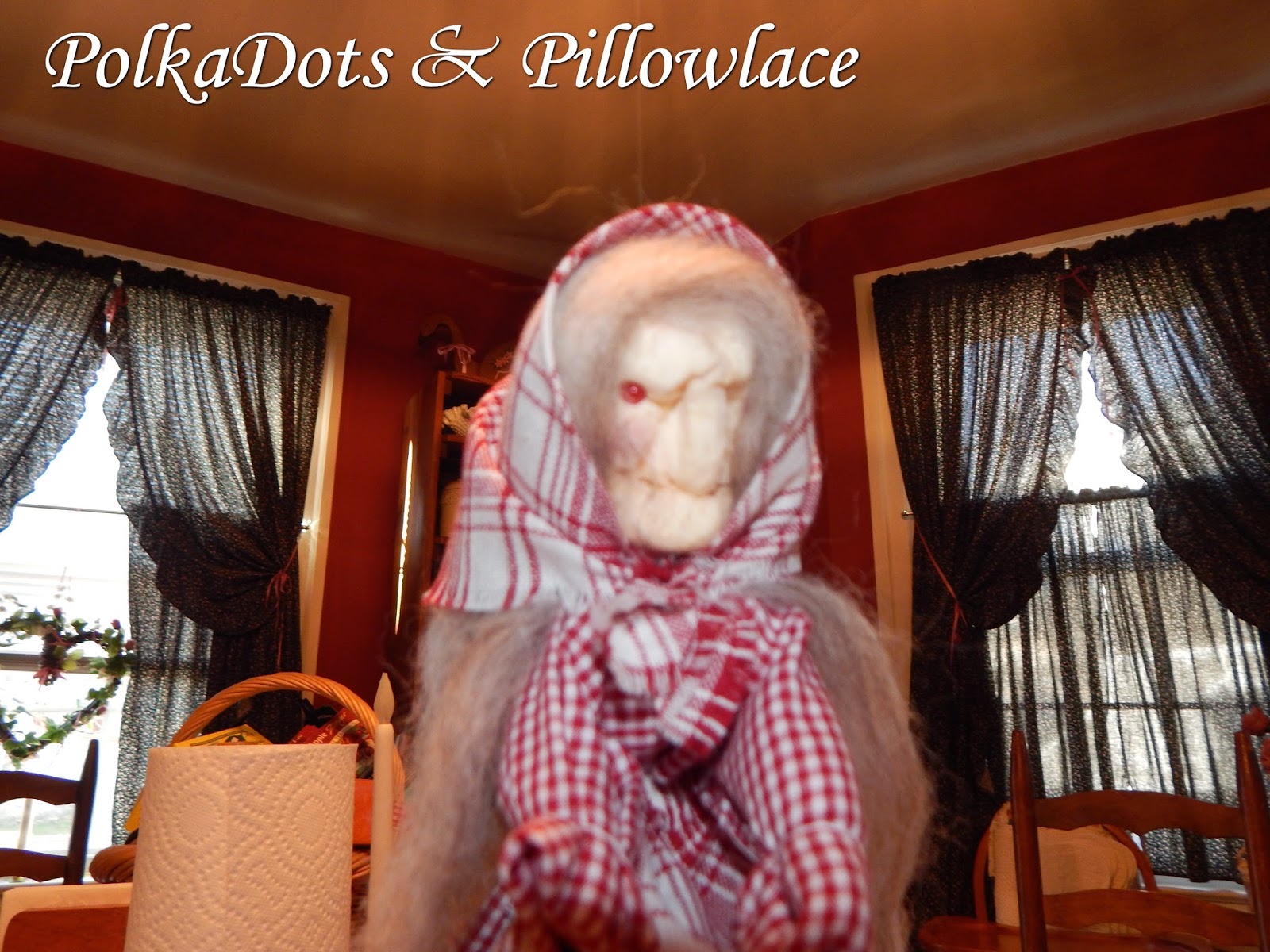 I think she's beginning to look like someone I know! Fay's darling witch has her own personality as well. She chose an eclectic mix of fabric for her gal and fashioned her a nice pair of glasses from thin wire to help her watch over Fay's kitchen that much better! 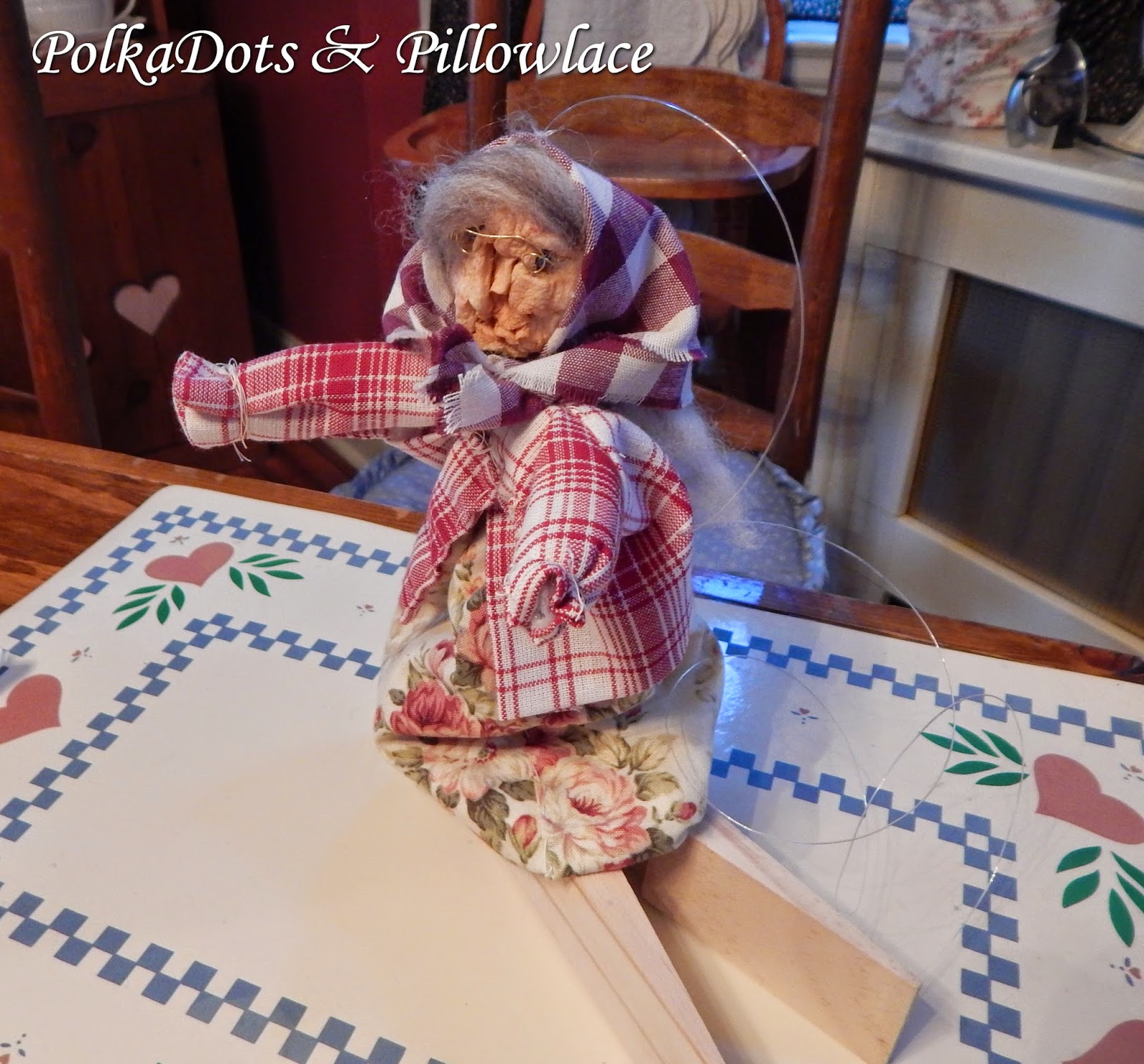 We threaded a needle with fishing line for a hanging thread, sewing it to the back of her neck and up through her hair and scarf. Fay gave her cottage witch a little broom and I selected a honey dipper for mine to give her a sweet ride. My witch's arms were a bit too short to wrangle that handle, so I have supplied her with a little rein made of a bit of leather. 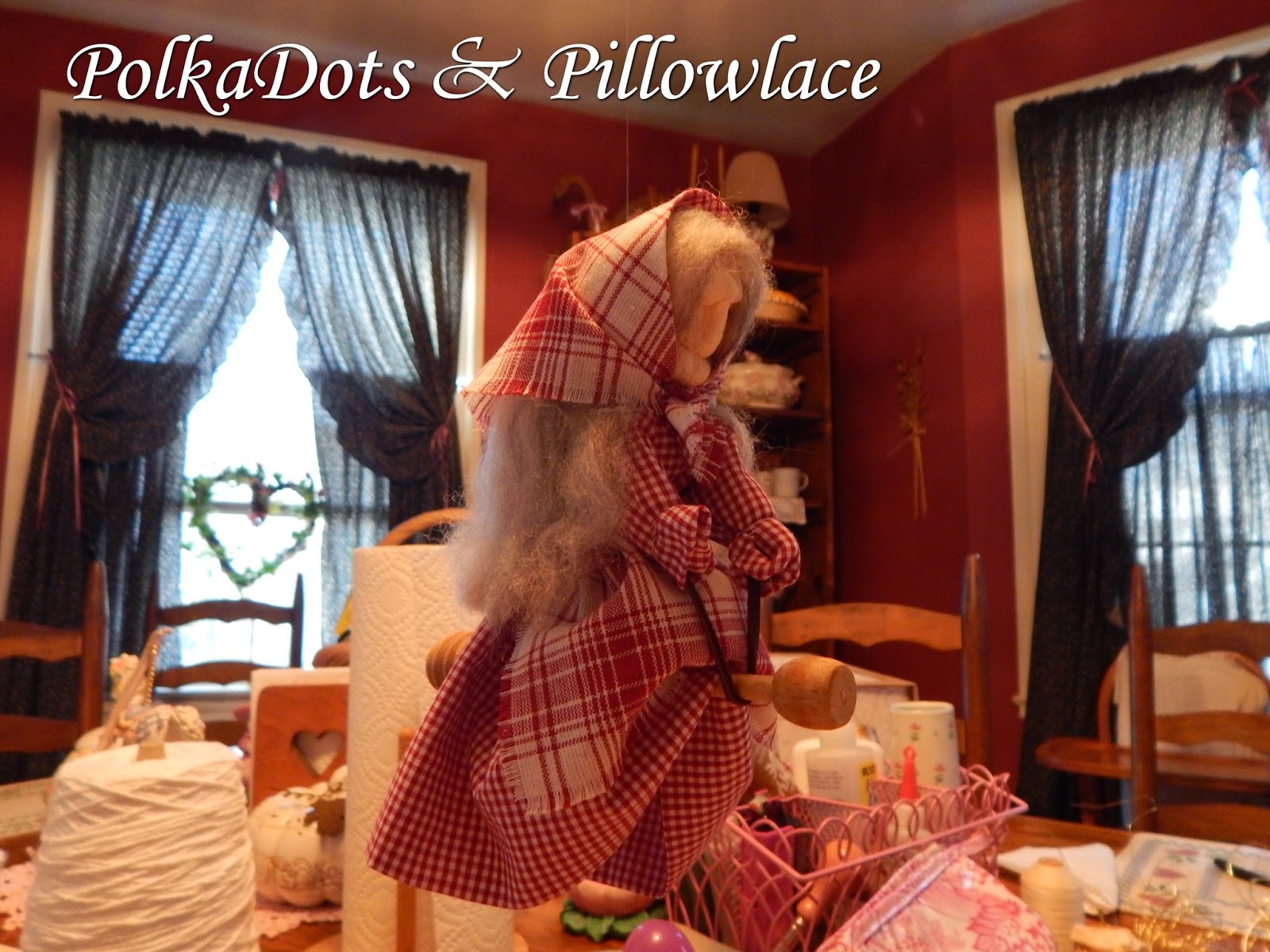 And here are the finished witches in their kitchens! I'm not sure how lucky they will be, but they sure are cute! Thank you, Aunt Pat, for inspiring me with your apple head collection!

My friend, Fay's, witch in her forever home: 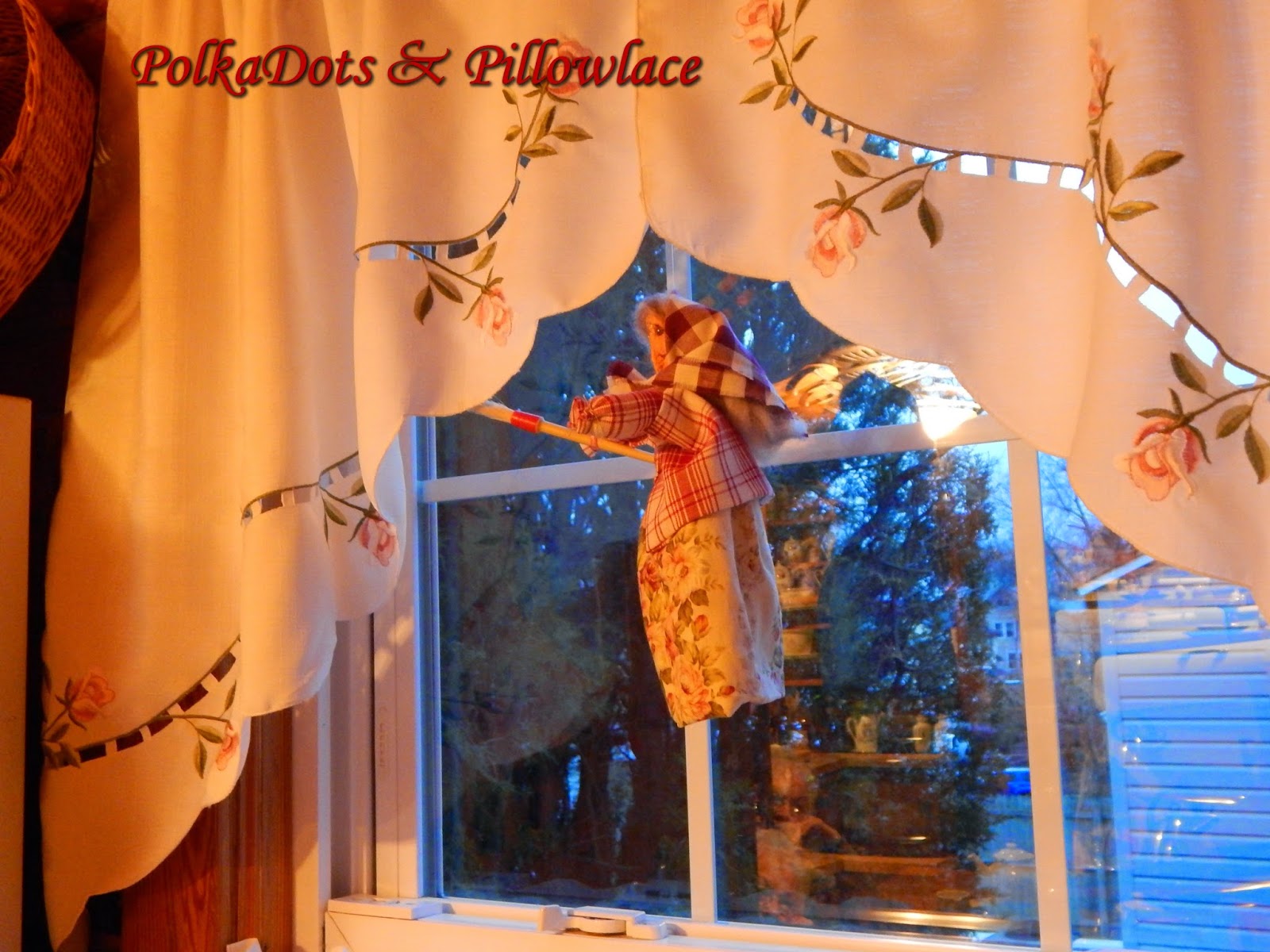 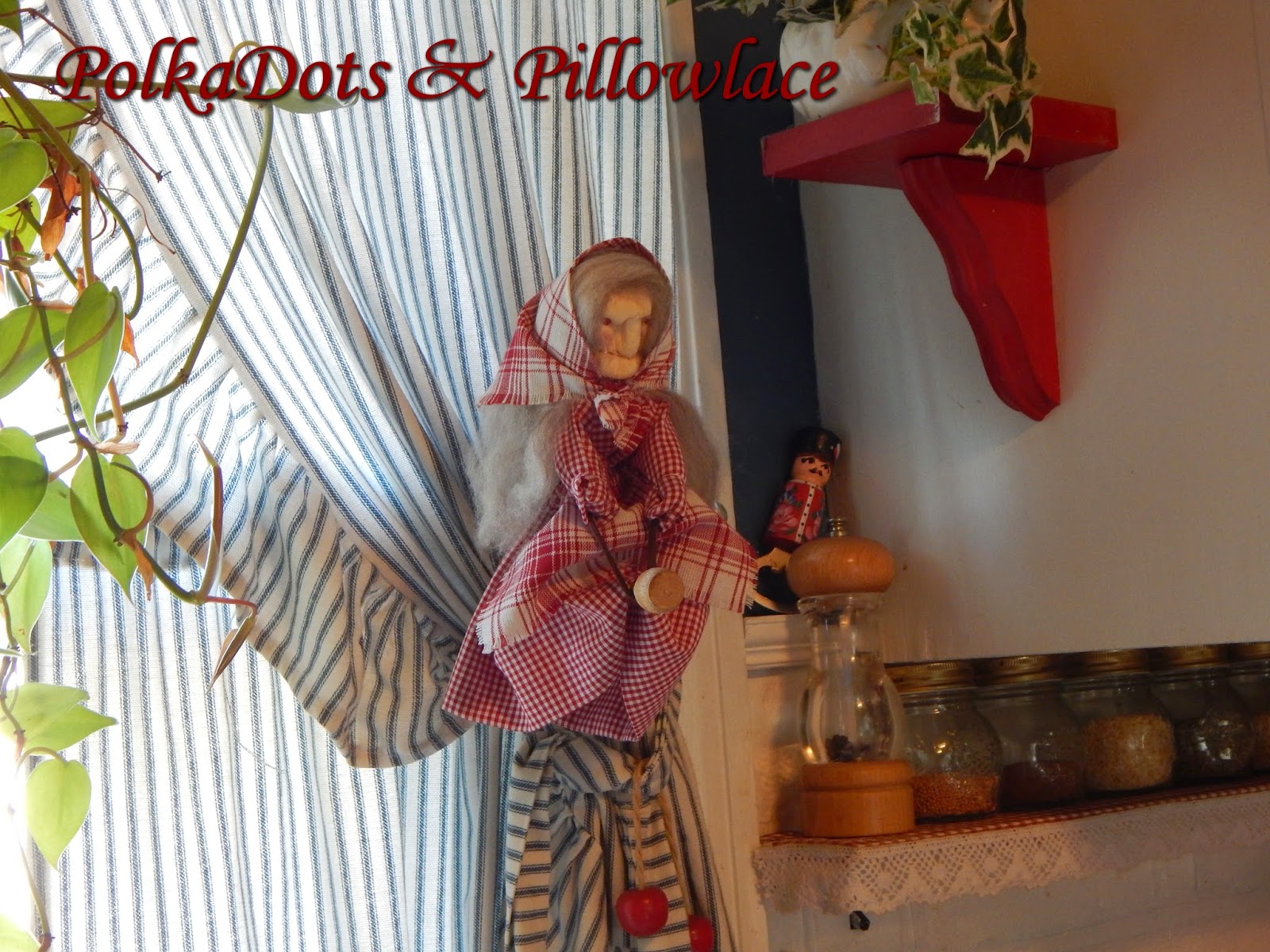 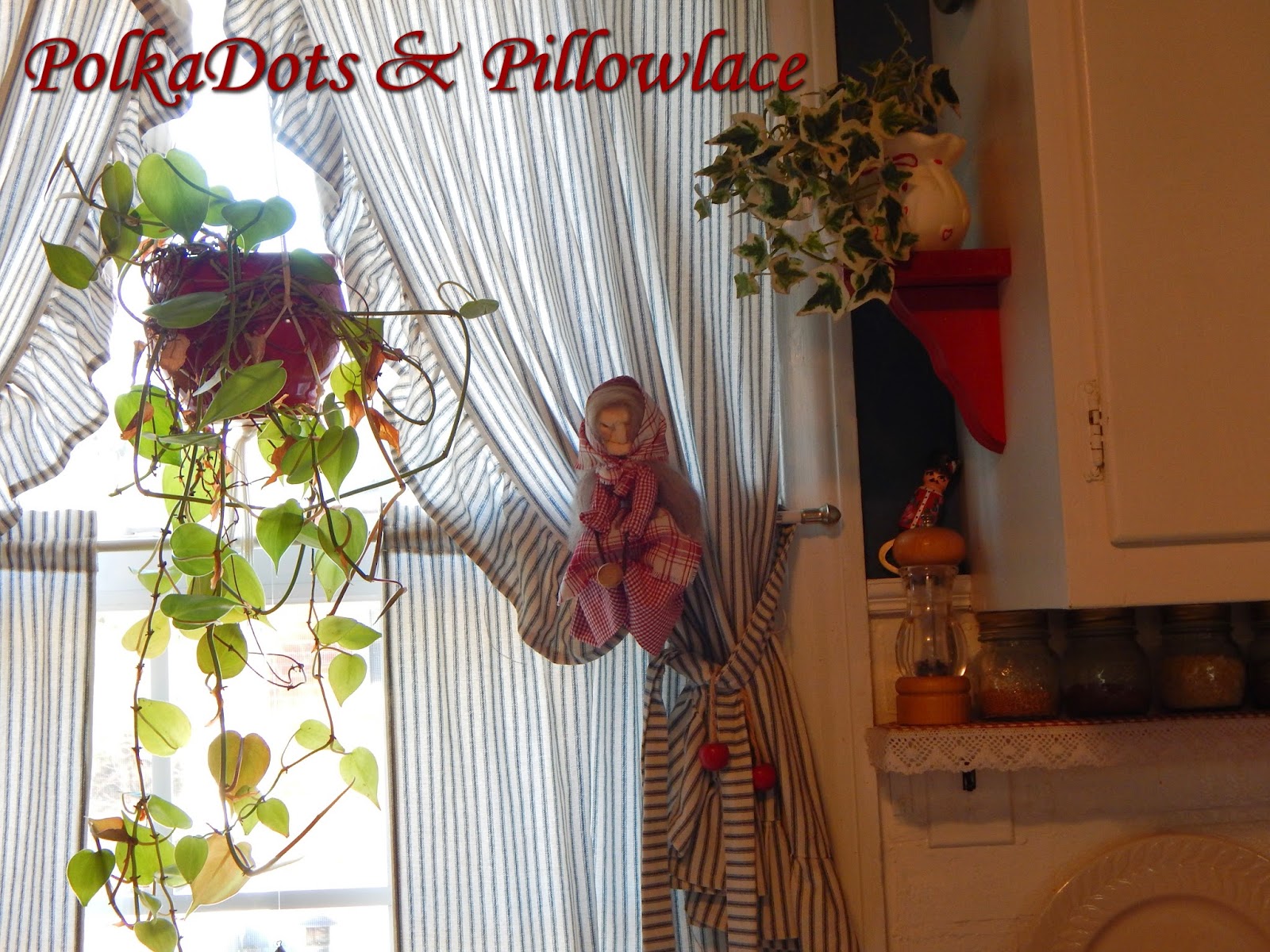 Thanks so much for joining me. I'll be back next week and I hope you will be too!

Posted by Nanette on April 11, 2015
Email ThisBlogThis!Share to TwitterShare to FacebookShare to Pinterest