Fall has certainly arrived and the weather seems to be hanging in a lovely balance. My rosebushes continue to bloom, as are other flowers in the yard. I find the mix between the pinks of spring and summer and the earthy tones of autumn often make me thoughtful.
I have brought in nearly all of my summer things now. The lawn chairs are tucked away in the garage and the pumps from all the fountains have been gathered. When I put them away I was already making a promise to myself that spring would arrive next year and my pretty things would all be there waiting to be pulled out into the sunlight. 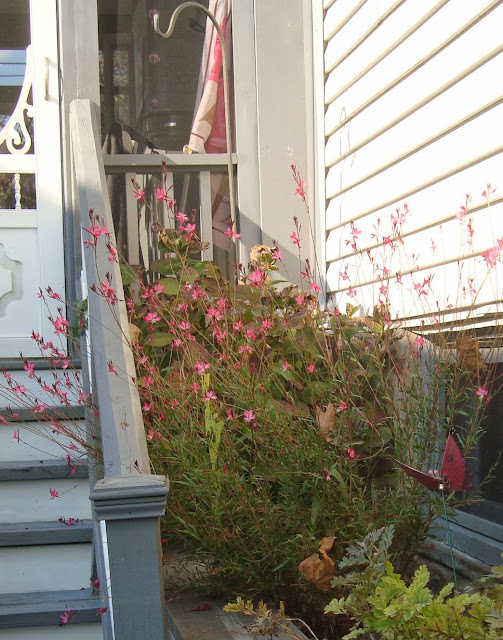 I feel more thoughtful than ever this year, it seems. It's no mystery why. This fall I will reach the landmark of being sixty years old. I have always had thoughts about growing old and the passing of time. Partly, I think, because my grandmother made it seem wonderful. I love the east coast and its weather because it so clearly marks the years. I miss things about my childhood home in southern California, the weather, or lack thereof, is not one of them. I like to know that I cannot stop the sand running through the hourglass, and I am reminded by the changing seasons.
Now, part of me is embracing being older. It's easy I suppose because my life is good, far better than it was in my childhood. I have battled for that and protect it fiercely. I've earned it and I treasure it. I've cultivated a good marriage, worked hard to make a comfortable home and struggled to learn the skills and tolerances I needed to get those and many other things. I'm still at it.
On the other hand, however, it makes knowing that one day it will fade away even harder. So, I have tried to learn from others. I see my friends that are also growing older, or are far ahead of me in the emptying of the hourglass, and I see which ones are happy. Some are living the fullest lives they can, and some are letting it all slip away, or worse are embittered by growing older. I think that life is a gift. Each grain of sand is given to be used wisely and can easily be taken away. I have consciously decided that I will not lie down whenever my sands run out and say I did not live, that I let any of it slip away. No matter what responsibilities life brings I have always made sure that when all needs are met I wrung every bit of joy I could out of what time was left in each day.
The story of two bios come clearly to mind. One story is of actress Carolyn Jones. Most people likely know her as Morticia Addams from the original Addams Family TV series. It was a role she came to hate. She loathed people remembering her as a comedy actress. She wanted to be known as a serious actress and spent her last years bitter with regrets. She passed away at 53. The other actress is Barbara Eden. Eden so greatly embraced and appreciated her role as Jeannie in the show I Dream of Jeannie that at 82 she still gets into her Jeannie costume with a broad smile on her face. She has always held that her dreams of being a famous actress were completely fulfilled. She has great appreciation. They are two women with two minds. I'm saying right now, even at sixty I won't get into a Jeannie costume, but I want that spirit all the rest of my days.
My young cat, Secret has found something at the window completely fascinating. I suspect it's another squirrel preparing for winter. We named her that because she never revealed her real name. Any pet I've ever had seemed to lend themselves quickly to an appropriate thing to be called. Miss Secret never has. She is a feral rescue with the scars of a hard kittenhood. Since she would not give up her name, then Secret it is. 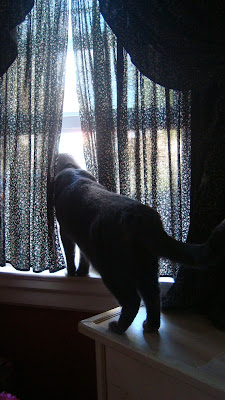 Thank you for reading. Please feel free to comment any time!
Posted by Nanette on October 29, 2013
Email ThisBlogThis!Share to TwitterShare to FacebookShare to Pinterest